Hydroxychloroquine does not prevent COVID after exposure to the virus: study 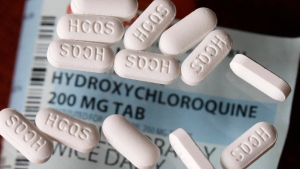 MONTREAL - Hydroxychloroquine is not effective in preventing the development of COVID-19 in people exposed to the novel coronavirus, a new study involving Canadian researchers concludes.

The results are published today in the New England Journal of Medicine.

The clinical trial was led in Canada by Dr. Todd Lee and Dr. Emily McDonald of the Research Institute of the McGill University Health Centre, in conjunction with partners at the University of Manitoba and University of Alberta.

The Canadian research is co-ordinated with a large study by Dr. David Boulware at the University of Minnesota.

It is the first double-blind, randomized, placebo-controlled trial to be completed assessing the effectiveness of the malaria drug hydroxychloroquine in preventing COVID-19.

“We conducted an international, randomized controlled trial to look at whether the use of hydroxychloroquine in patients who'd had a high-risk exposure to COVID-19 would prevent the development of symptomatic disease compared to placebo,” Lee said in an interview.

Participants were recruited from Quebec, Manitoba, Alberta and across the United States. In total, the study involved 821 asymptomatic adults who had been exposed at home or in the health-care setting to someone with COVID-19.

Among them, 719 participants reported a high-risk exposure to a confirmed case of COVID-19 - being within two metres of the person for more than 10 minutes - without adequate personal protective equipment.

Most of these people were healthy young adults living in the community, with an average age of 40.

Within four days of exposure, participants received the placebo or hydroxychloroquine by mail, to be taken for a period of five days, beginning with a higher dose on the first day. Researchers and participants were not told which treatment was being administered.

“The approach was if we could load the patient with hydroxychloroquine in the tissues before the incubation period was over, then maybe we could prevent those people who've been exposed from getting sick,” Lee said.

“There was some observational, anecdotal stories suggesting that this was going to be effective, and the purpose of the randomized controlled trial was to demonstrate whether that was true or not true.”

Out of 821 participants, 107 developed COVID-19 - confirmed either by a test or by compatible symptoms - during the 14 days of followup.

Among those who received hydroxychloroquine, 49 developed the disease or symptoms like fever and cough, compared to 58 in the group who received the placebo, meaning that statistically, the drug was no more effective than the placebo.

“We found that there was no statistical difference between patients who got the placebo - which was a vitamin pill - versus those who received the active drug hydroxychloroquine,” Lee said.

Two patients were hospitalized, one from each group, but no one has died.

Side effects from the medication, such as nausea and abdominal discomfort, were more common in patients taking hydroxychloroquine than in those receiving placebo.

Hydroxychloroquine is still being studied around the world, including whether it could reduce the risk of infection during exposure or lower the risk of hospitalization in infected patients. U.S. President Donald Trump has said he is taking hydroxychloroquine even though he has not tested positive for the coronavirus.

At the McGill University Health Centre, a trial looking at early treatment in the community is underway.

“I would have loved to have a positive study, but in circumstances like this you need the negative studies too so you can redirect attention,” Lee said.