'I am not going to just say there's always next year,' Tory says after another Leafs playoff collapse 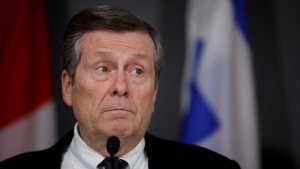 Mayor John Tory has written a letter to Maple Leafs fans expressing his confidence in the team despite another stunning playoff collapse.

The club had one of the best records in the NHL this season and took a three games to one lead in their first round series with the Montreal Canadiens before dropping three straight contests to end their playoffs and extend a 17-year streak of futility in which they have failed to win even a single post-season series.

In an open letter to fans on Tuesday, Tory conceded that the team’s Game 7 loss on home ice in front of 550 fully vaccinated healthcare workers no less “was tough to take,” particularly in light of the team’s longstanding struggles in elimination games.

But he said that the “team will learn lessons from this loss” and hopefully “be made stronger by it.”

“I know for the true Leafs fans last night's loss was tough to take – particularly because we've had disappointing Game 7's before,” he said. “I've been hopeful about Leafs teams many times over the years but I truly thought this team – with so many talented players - and this year – with a strong performance in the regular season - was going to be THE year. So I know we're all frustrated today and it's tough to watch the gloating of Canadiens fans and the other hockey fans who love to hate our Buds.”

It is perhaps unusual for the mayor of a city to have to write an open letter to fans following a loss by a local sports teams but the fact that Tory felt it was necessary likely speaks to how deeply upsetting the Leafs’ failure to get out of the first round yet again is for so many Torontonians.

In his letter, Tory conceded that it is “another sad end to a Leafs season” and acknowledged that there is probably little point in him saying “there’s always next year” once again.

Instead, Tory expressed confidence that Maple Leafs Sports and Entertainment “will spend the next few months” focused on how to end the club’s longstanding Stanley Cup drought, which dates back to 1967.

He also said that he will do his part to help get fans back in Scotiabank Arena next season.

“I want that safe reopening to proceed so that as early as next year we can be ready to plan a Stanley Cup parade without worrying about health restrictions and what I know will be an absolutely amazing crowd scene,” he said.

Tory’s letter comes just hours after he raised a Canadiens flag at city hall to fulfill his end of a bet with Montreal Mayor Valérie Plante. He will also have to send her peameal bacon sandwiches from St. Lawrence Market and personally donate $500 to the Montreal Canadiens Children’s Foundation.