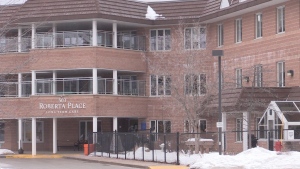 The United Kingdom COVID-19 variant has been identified at a Barrie long-term care home coping with a massive outbreak of the virus.

The cases are among five residents and one employee.

As of Saturday, 127 residents have tested positive for the virus, along with 84 staff members, which represents half of the workers who helped respond to the outbreak, SMDHU Medical Officer of Health Dr. Charles Gardner said during a virtual press conference Saturday afternoon.

Only two residents at the home have not tested positive for the virus.

A total of 32 residents have died from the disease caused by the novel coronavirus since the outbreak started at the home on Jan. 8.

Although only six samples tested positive for the UK variant, Gardner said he is confident that all infected residents and staff have the variant.

“We’ve had test results on six individuals but I do not doubt that all of them have the variant. There’s no reason to believe that a second variety was introduced onto the site at the same time coincidently. I don’t have any reason to believe that it’s anything other than this UK variant throughout the facility and affecting all positive cases," he said.

On Wednesday, SMDHU confirmed that preliminary laboratory testing of six cases at the home had identified a high likelihood that there was a “COVID-19 variant of concern.”

The second test, which is a genome sequencing test, determined that the six samples were the UK B.1.1.7 variant.

The UK variant, along with the 501Y.V2 variant from South Africa, are believed to be about 50 per cent more transmissible than other variants of the virus.

Another variant of concern that has surfaced is the E484K variant found in Brazil.

Gardner said the home is doing all it can to contain the variant but said he is "very concerned" about it spreading into the broader community.

Gardner added that since the variant has already infected household members of those who worked at the home, community transmission is possible.

"It’s certainly on the edge, I would agree. It depends on their contacts beyond their household and whether or not we’re starting to see spread there and we haven’t seen that yet but we’re on the very edge."

On Thursday, SMDHU said a worker at the home who had close contact with someone who travelled abroad was one of the first to be suspected of carrying the variant into the home.

The worker followed all precautions, and was tested regularly, but did not initially show symptoms.

Gardner said the worker did not violate the Quarantine Act or any recommendations laid out by the government.

"The exposure in question did not take place out in the community and the staff member who became a case at the very beginning did not have symptoms when they attended work. They were asymptomatic when they were tested routinely," he said.

With the infection spreading rapidly throughout the home since early January, Gardner was asked about why residents weren't cohorted earlier to reduce transmission.

He said that cohorting wasn't implemented successfully due to reduced staffing levels.

"The home never successfully put in place the kind of cohorting that you’re describing where you maintain the restriction on the movement of staff or the exposure of staff to cases and non-cases. That certainly is something that is an optimum practice in an outbreak and that certainly wasn’t established," he said.

Earlier this week, SMDHU ordered temporary leadership of Roberta Place to be given to Orillia Soldiers’ Memorial Hospital to bring the outbreak under control.

The hospital will help ensure that staffing, training, and equipment and supplies are in place so that the facility can continue to respond to and control the outbreak.

However, on Thursday, SMDHU Associate Medical Officer of Health Dr. Colin Lee said the home was supposed to get doses of the Moderna vaccine earlier but the doses were diverted to regions with a higher prevalence of long-term care outbreaks.

He said that homes “in areas around the GTA received Moderna (vaccine) that was destined for us.”

This was due to the government’s goal of administering the first dose to all long-term care homes in York, Peel, Toronto and Windsor Essex by Jan. 21.

“If we had a vaccine a month before we went in [last] Saturday, I think this outbreak would have been much less severe,” he said.

On Thursday, the provincial government said there were 15 known cases of the UK variant across the province, excluding the now confirmed cases at Roberta Place.