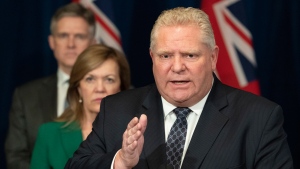 Troops were sent to the facilities in April to provide logistical support as staff worked to contain deadly outbreaks of the virus.

Military officials, however, soon became aware of a number of issues at the facilities.

Some of the issues pertained to poor infection control practices and the misuse of Personal Protective Equipment while others involved the apparent neglect of residents and, in some cases, their abusive treatment by staff.

At Eatonville Care Centre in Etobicoke, the military said it reported numerous instances of aggressive behaviour to management, including “degrading or inappropriate comments” by staff and the “aggressive changing of incontinence products” with staff refusing “to stop or slow when residents complained of pain.”

Meanwhile, at Orchard Villa in Pickering the military said that staff don’t always sit up residents before feeding or giving them medication and that the practice appeared to contribute to the death of a patient, which is now being investigated by Ontario’s Chief Coroner.

“We knew these homes were having serious problems and needed help. But, until yesterday morning, we didn't know the full extent of what these homes, what these residents were dealing with,” Premier Doug Ford said at a news conference on Tuesday afternoon. “The reports they provided us were heartbreaking, they were horrific, it's shocking that this can happen here in Canada.”

‘Little to no disinfection’ amid pandemic

Ford said that government officials knew that the five homes where the military was deployed had reached a “crisis situation” and needed help but he said they were not aware of the full scope of the problem.

In the report that was shared with provincial officials and made public on Tuesday, Brigadier-General C.J.J. Mialkowski systematically detailed the issues identified at the homes, which also include Altamount Care Community in Scarborough, Hawthorne Place in North York and Holland Christian Homes' Grace Manor in Brampton.

At Hawthorne Place, he said, “little to no disinfection” had been conducted amid the COVID-19 pandemic and that when troops arrived they noted “significant fecal contamination in numerous patient rooms” as well as an infestation of ants and cockroaches.

He said that nurses and personal support workers were also observed not changing their personal protective equipment for several hours as they moved between patient rooms, potentially hastening the spread of the virus.

He said that staff sometimes “delayed changing soiled residents leading to skin breakdown” and, in some cases, acknowledged that residents hadn’t been bathed “for several weeks.”

He said that a linen shortage also led to residents having to sleep on beds without sheets at one point, which exacerbated their skin breakdowns.

As well, he said that patients were sometimes observed crying for help without staff responding for upwards of two hours and on other occasions were heard “audibly choking” after what he described as “forceful feeding” by staff.

Alarmingly, similar instances of apparent neglect were also reported at other homes.

At Orchard Villa, a rotten food smell was observed in a hallway and a Canadian Forces member then found “multiple old food tables stacked on a bedside table” belonging to a resident.

At Altamount Care Community in Scarborough, Mialkowski said that residents didn’t even typically receive three meals a day due to staffing issues and often faced a “significant delay” in getting food.

He said that at least 15 residents also developed significant pressure ulcers as a result of “prolonged bed rest.”

“At time of arrival many of the residents had been bed bound for several weeks,” he said. “There was no evidence of residents being moved to wheelchair for parts of day, repositioned in bed or washed properly.”

The Canadian Forces report did note that “conditions have noticeably improved” at all five long-term care homes, particularly Orchard Villa and Holland Christian.

The report, however, recommends that the military remain at the homes for an additional 30 days pending government approval.

Ford has promised a full investigation into the allegations, which will include a probe by Ontario’s Chief Coroner.

He said that the result of those investigations will also be shared with police, who will “look into any possible criminal charges.”

"We must change the system. This tragedy must serve as a wake-up call to our entire country and it's no secret that COVID-19 has taken a system with deep problems, a system that has been neglected for years, and pushed it to the brink,” he said. “COVID-19 has exposed the deep, deep cracks in the long-term care system. It's up to us now to fix these problems, it is up to us face the hard truths that have been ignored for decades."

She said within days of the home declaring an outbreak, 100 staff members were self-isolating, while others did not feel comfortable coming to work.

“The remaining staff who came to the home each day to provide care were faced with reduced staffing levels and an increased number of residents requiring their care,” Coburn said. “Our home along with our staff were overwhelmed.”

She said concerns about staffing were “immediately” raised with the Central Local Health Integration Network, and Humber River Hospital.

“We were fortunate to get some help, but not the staffing support that we needed. It wasn’t enough,” she said.

She said the home is taking the report “very seriously” and will be reviewing each item with the management team.

In a statement, Eatonville Care Centre Executive Director Evelyn MacDonald also pointed to the fact that many staff members had self-isolated or staff away for health reasons. She said the “shortage of staff was a significant challenge” and that “those who remained were overwhelmed by the pressures brought on by COVID-19.”

Lakeridge Health, which was called in by Durham Region to help manage the outbreak at Orchard Villa, said Tuesday that the home had been in outbreak for almost two weeks before they were called in to assist.

“Lakeridge Health took immediate actions to begin to manage the outbreak at Orchard Villa when it arrived on site in late April,” the organization said. “These included adding dozens of frontline providers to support care to residents along with initiating decontamination (deep cleaning), infection prevention and control measures and ongoing staff education and training on the use of PPE.”

Lakeridge Health said the home has “made strides” in managing the outbreak since the organization came on board to help.

Ontario’s long-term care homes have accounted for nearly three quarters of all COVID-19 deaths in the province (1,538), though the allegations contained in the report extend far beyond the transmission of the virus.

“It is deeply disturbing. There are things that are in there that are extremely troubling and we need to take action,” Prime Minister Justin Trudeau told reporters earlier in the day. “I spoke with the premier this morning to ensure him that, of course, the federal government would be there to support them as they deal with this situation,” he said.

In a statement released on Tuesday afternoon, the Ontario Personal Support Workers Association welcomed the report, noting that its 41,000 members “have been working through these difficult conditions for years” but have seen them further worsen over the last three  months.

The association said it is “saddened and aligned with the current Canadian Armed Forces discoveries.”

Meanwhile SEIU Healthcare, which represents 60,000 frontline healthcare workers, said in another statement that its members in long-term care homes have already been “ringing the alarm bells throughout this entire crisis” and also welcome the report.

“Unfortunately, we have had to fight the provincial government every step of the way to ensure long-term care companies were keeping workers and residents safe,” SEIU Healthcare President Sharleen Stewart said in the statement.

Graphic warning: Here is the full report from the Canadian Armed Forces. Details included in the report may be disturbing.