'I wish I could get the vaccine tomorrow': Grocery workers struggle with anxiety 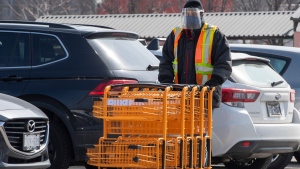 Grocery store workers are struggling with heightened stress and anxiety as they remain on the front lines of a surge in COVID-19 infections in Canada's hot spot areas, industry watchers say.

Despite being deemed essential and continuing to go into work as stay-at-home orders are renewed, most supermarket employees have yet to receive a vaccine or a pay boost.

“I wish I could get the vaccine tomorrow,” said Karen Ekstrom, a Real Canadian Superstore employee in Calgary, who has worked as a cashier for 22 years.

“I think all the grocery clerks should get one because I lost count of how many cases I've had in my store.”

Ekstrom is a member of the United Food and Commercial Workers union, which is calling on provinces to legislate sick days and pandemic pay and vaccinate members that can't work from home sooner.

They say these workers are going to work scared and stressed and quick action is needed to protect them from a third wave ravaging several provinces unable to contain the spread of the virus.

“They've been prioritized and they should be vaccinated by July - but we think it should be faster,” said Tim Deelstra, a spokesman for the United Food & Commercial Workers union, referring to the Ontario vaccine rollout.

“There's a lot of stress and anxiety that they have to deal with in terms of going to work. We get reports everyday of workers who are getting sick with COVID-19.”

Ekstrom knows those scares well. Her store was recently hit with an outbreak that affected all but four workers on the overnight shift, between those that contracted COVID and others forced to isolate.

The store had to borrow staff from other locations.

The supermarket tests its workers for the virus every week, but Ektrom said, it has sometimes had to boost the frequency to every day, when COVID-19 scares are numerous.

While Ekstrom feels safe wearing a mask and stationed behind Plexiglas at the checkout, some customers try to get behind the barrier and others have to be reminded about distancing and how to wear a mask, if they wear one at all.

Many don't take the reminders well.

“The management team at my store have been fantastic, but the customers are terrible and they're just getting worse and worse,” Ekstrom said.

“I learned to defend myself with this whole pandemic, so I've learned to tell the customers 'I'm here to help you not for you to be rude to me and abuse me.”'

On top of quicker access to vaccine, she wishes enforcement authorities would patrol stores more often to increase safety.

Meanwhile, other grocery workers and unions are seeking compensation.

Some supermarket workers in regions under lockdown are set to receive a bonus or gift card in recognition of the increased hazard they face working with the public.

For example, Metro Inc. said it's offering gift cards of up to $300 to about 45,000 front-line workers in Ontario and Quebec while Sobeys Inc. brought back pay bonuses in lockdown areas.

But many grocery store employees have yet to see a pandemic pay raise reinstated during the current stay-at-home order.

The low wages and insufficient full-time hours have led to chronic high turnover in the industry, said Kimberly Bowman, senior projects manager with the Brookfield Institute for Innovation and Entrepreneurship, a policy think-tank based at Ryerson University.

“A huge challenge is both the rate of pay and the number of hours available,” she said. “Many grocery store workers start around minimum wage and might be asked to be available for 40 to 50 hours a week but only get scheduled for 20 of those hours.”

The grocery workers that remain end up cobbling together hours at multiple jobs to get by, Bowman said.

“We've heard from grocery workers, especially in the Toronto and Hamilton areas, that are working two or three jobs, or doing Instacart or Uber Eats deliveries on the side to make ends meet.”

Bowman is leading a research project into food retail employment, interviewing about two dozen supermarket workers and surveying hundreds more across Ontario over the past year.

Many of the grocery employees she interviewed described brainstorming ways to keep customers and staff safe during the pandemic by problem solving potential bottlenecks or issues in the store, she said.

“I was impressed by the invisible work that went on by workers trying to keep themselves and the public safe,” Bowman said.

While workers appreciated the pay bonuses, she said the raises were an inconsistent patchwork across the industry and that many said receiving recognition from their manager, co-workers and the public was almost as important.

“They want to be treated fairly and feel valued and respected for a job well done,” Bowman said.

“Almost as much as we heard talk of hero pay or bonus pay, we heard about the importance of simple acts of recognition,” she said.

“A manager who was understanding about scheduling difficulties and willing to make accommodations seemed nearly as important to some.”

This report by The Canadian Press was first published April 16, 2021.