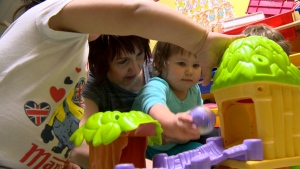 Inconsistent funding for licensed child-care centres means facilities in some Ontario municipalities may not be able to reopen or expand capacity even as the province allows them to accept more children, an industry association said Monday.

Ontario is the only province that administers funding for child care through municipalities, and discrepancies at the local level are causing delays in daycare reopening in some areas, said Andrea Hannen, executive director of the Association of Day Care Operators of Ontario.

In some municipalities, daycare owners and operators haven't received funding or a firm commitment on how much they will receive, and thus can't afford the expense of reconfiguring their space and programming to fit public health guidelines and requirements, she said.

“That impacts whether or not you're going to reopen. And so far, some of the municipalities have dropped the ball on that,” Hannen said.

“Parents pay the price for that. I don't think whether or not you can return to licensed child care should depend on where you live.”

Premier Doug Ford said Monday that roughly 90 per cent of child care capacity has been restored, with more facilities set to reopen next month.

A spokeswoman for the Minister of Education said that number is based on the child care spaces that would be available if all of the province's roughly 5,500 daycares had reopened. As of Monday, she said, 2,365 are operating.

Municipal Affairs Minister Steve Clark said the province is working with the 47 local child-care service managers to ensure the money gets flowing so facilities can reopen safely and at an expanded capacity.

“I know that parents across the province are very anxious... as areas move through the stages (of reopening) to ensure that child care is available,” he said.

As of Monday, a maximum of 15 children plus staff members are allowed per room in a daycare, up from 10.

The groups of children must stay together throughout the program for at least seven days, and cannot mix with kids in different “cohorts,” as the groups are called.

While a government document offering operational guidance says staff members are no longer included in the size of the cohort, it noted that staff should not rotate between groups. It said supervisors should “limit their movement between rooms, doing so when absolutely necessary.”

The ministry said infants are excluded from the increased capacity, because they've never been allowed to be in groups of more than 10.

There were 102 new resolved cases reported.

The provincial government said it was able to complete more than 24,664 tests the previous day.

It also said 82 people are in hospital because of the virus, including 30 people in intensive care and 18 on ventilators.

The province noted several hospitals did not submit data over the weekend and there will likely be an increase in numbers when they do.

This report by The Canadian Press was first published July 27, 2020.