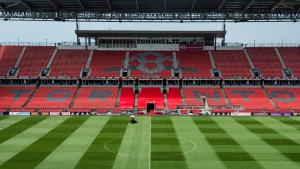 The estimated cost to taxpayers for Toronto to host several 2026 FIFA World Cup games has risen to about $300 million, or at least $60 million per expected game.

Toronto city staff says the estimate has increased by about $10 million due to “recent escalation in inflation rates.”

The cost of hosting the matches now approaches the net GDP benefit to the city, pegged at $307 million and 3,300 direct new jobs.

The federal and provincial governments are expected to pay two-thirds or about $184 million of the cost.

Meanwhile, Toronto is expected to fork over $77.1 million, along with $24 million worth of services in kind. Staff say the city can pursue sponsorships and rights sales to recoup some of these costs.

When the City of Toronto initially expressed interest in hosting games back in 2018, the cost to taxpayers was estimated between $30 and $45 million.

The spending includes $15 million to upgrade sports fields at Sunnybrook and Centennial parks for guest team training purposes, and $25 million to increase capacity at BMO Field.

The city will also be responsible for hosting a “FIFA FanFest” running the length of the 34-day tournament and beefing up area public transport services and security.

The city will hire nine employees in 2022 to begin planning and operations work for hosting the games.

Canada will host 10 of the 80 games in the expanded 48-team format tournament, with matches split between Toronto and Vancouver.

So far it is not clear how many of the games each of the Canadian host cities will get.