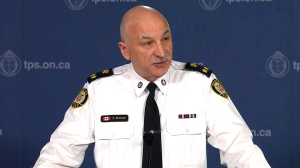 Toronto‘s new interim police chief offered an apology Thursday to a young Black man who lost an eye in a 2016 assault by an off-duty Toronto police officer as he promised that the force would do things differently going forward.

Speaking at his first news conference with reporters since taking over from former police chief Mark Sanders last week, Interim Chief James Ramer said a report issued to Miller’s family today found that Toronto police were wrong not to notify the Special Investigations Unit on the night of the assault on Dafonte Miller.

"We made the wrong decision that night," Ramer said. “As a result of that decision, trust has been broken between the police, Dafonte Miller and the broader community. For that, on behalf of the Toronto Police Service, I want to apologize."

Const. Michael Theriault was found guilty of assaulting Miller in June, though he is appealing the decision.

Ramer’s apology to Miller comes within days of taking over from Saunders on an interim basis. Speaking with reporters, the interim chief promised that the police service would be committed to transparency going forward. However he said he is not yet at liberty to share details of the confidential report by the Office of the Independent Police Review Director (OIPRD).

He did say that he and the former chief were not notified of the assault on the night it happened and were not made aware of it until months later.

Ramer said the service now understands that any police-involved incident that results in a serious injury must be reported to the SIU, even if the officer involved was off-duty.

“We know that further action is needed and I know Interim Chief Ramer is committed to working with the Police Services Board and Council on important efforts to continue to modernize the service."

Ramer also said that transparency and accountability are priorities for him and that Toronto residents will see that "in virtually everything that we do."

Ramer said that he is committed to promoting inclusivity and working on issues of anti-Black racism.

The interim chief also said that some of his other priorities will include better addressing mental health calls for service, gang prevention strategies, more aggressive traffic enforcement and implementing body-worn cameras.

Ramer said he anticipates that by the end of this year, nearly all front-line TPS personnel will be wearing body-worn cameras, a tool Mayor Tory and others have lauded as a positive move for increasing transparency, though some activists have expressed scepticism.

In the wake of a number of high-profile cases of police brutality, activists around the world have been calling for the de-funding of police services. Toronto City Council has endorsed reform measures, such as the body cameras, but has declined to slash the police budget.

In his first chat with reporters as interim chief, Ramer also thanked Saunders for his work and said he is “honoured” to be heading up the service during a time when it faces a number of challenges.

Speaking ahead of Ramer, Toronto Police Services Board Executive Director Ryan Teschner lauded Ramer as a leader in policing with a long history of community engagement and inclusivity, who is known for his collaborative approach.

Teschner said Ramer has the board’s confidence to head up the service as it searches for a permanent replacement during a “pivotal time in policing history.”

Prior to taking the position, Ramer worked as the deputy chief of specialized operations command, which is responsible for numerous investigative and specialized units.

He first joined the force in 1980, and has since led the service’s Community Partnerships and Engagement Unit and co-chaired the chief’s Black Consultative Committee for five years.

Ramer will serve as the city's interim police chief until a permanent replacement is found.