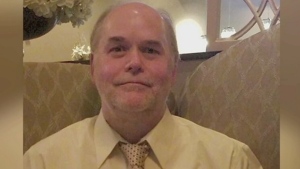 The wife of a 58-year-old American man accused of travelling with a “mock improvised explosive device” at Pearson International Airport swears the item is an alarm clock, not a fake bomb.

Joseph Galaska was travelling home to Milwaukee, Wisc. by himself last Thursday after a vacation with his wife and a friend in Brazil when he was arrested and charged with mischief for a possible security breach aboard a United airlines flight.

Maria Silva, Galaska’s wife, maintains that this is a big misunderstanding and that the item found in his suitcase was a novelty he bought in Brazil.

Silva says the trip included a layover in Toronto where Galaska was supposed to board a connecting Chicago-bound United Airlines flight.

He was arrested at Pearson airport by U.S. Customs and Border Protection agents who discovered “a mock improvised explosive device (IED) during an inspection of a traveller’s suitcase” at the airport’s pre-clearance area.

“For the safety of travelers within the pre-clearance facility, U.S. Customs and Border Protection stopped all traveller processing while the mock IED was tested.”

Silvia told ABC’s WISN in Milwaukee that she personally saw the item purported by investigators to be a fake bomb and insists it’s harmless.

U.S. Customs and Border Protection grounded Chicago-bound United Airlines Flight 547 at Pearson shortly before 7 a.m. for what was initially described as a “major security breach.”

The investigation held the United Airlines flight on the tarmac for more than four hours, causing many passengers to miss their connecting flights in the U.S.

One passenger described the whole scenario as “nerve-wracking.”

Speaking to ABC, Silva said her husband tried to explain to authorities that the device was a clock.

“They checked and they saw it was nothing. It wasn’t a bomb, it was a clock.”

She insists Galaska, a retired tool-and-die maker, is innocent.

“He’s someone who has never done anything wrong to anybody,” she said. “He’s in jail and that’s sad.”

Galaska was charged with one count of mischief in relation to the incident.

He was held for a bail hearing. On Friday, he was granted release. Although his son travelled to Brampton over the weekend and posted his $5,000 bail, the Canada Border Services Agency is keeping him in custody “pending further investigation,” his lawyer, Naomi Lutes told CTV News Toronto on Monday.

“He should have been released on Saturday in the normal course, however he has been put on an immigration hold,” Lutes said.

It’s unclear why Galaska is still being held.

“All I can say is that he is looking forward to pleading not guilty at the earliest opportunity and defending against this charge,” Lutes said.

Galaska appeared in a Brampton court on Monday.

His lawyer is currently seeking a detention review with Canada Border Services Agency, which Lutes says is mandatory within 48 hours of the arrest.

Galaska has not received a response from Canada Border Services Agency on when the review will occur.