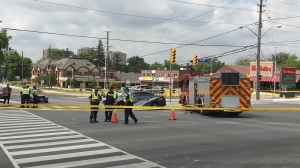 Police are shown at the scene of a pedestrian struck investigation near Midland and Sheppard avenues. (Scott Lightfoot)

A woman in her 70s is dead after she was struck by two vehicles in Scarborough, both of which failed to remain on scene.

According to Sgt. Brett Moore, the woman was crossing Midland Avenue at Sheppard Avenue at around 11:30 a.m. when she was hit by a large fuel truck that had just turned onto the street from eastbound Sheppard Avenue and was headed southbound.

Moore said that the woman was knocked to the ground by the truck and then run over by its rear wheels, likely killing her.

The truck never came to a stop and continued to travel southbound along Midland Avenue, Moore said.

The truck and its driver was located a few hours later by investigators, police said.

Meanwhile, a few minutes after the pedestrian was struck by the fuel truck another vehicle, possibly a white Honda Civic, arrived on scene.

Moore said that vehicle struck the woman again “further carrying her down that street.”

He said that the driver, described as young male, initially came to a stop and got out of his vehicle but then got back in and fled the scene upon realizing what had happened.

“It is a very gruesome scene and we are working right now first to identify the woman conclusively so we can get the family notified and from there it is about collecting the evidence,” he said. “We have got businesses and if folks have cameras in their windows or anything like that please come forward so we can review the tapes.”

Moore said that the woman was in a crosswalk when she was struck and had the right-of-way.

Speaking with CTV News Toronto at the scene, one woman who was waiting at a red light said that she heard a scream and then saw the woman get struck by the fuel truck. She said that she believes the driver knew they hit someone because “they slowed down a little bit” after striking the woman. The second driver, she said, also knew that he had hit someone because he actually got out of his vehicle briefly.

The intersection of Midland and Sheppard avenues was closed for several hours for a police investigation but reopened at 4 p.m.

It is not clear what charges, if any, the driver of the fuel truck will face.