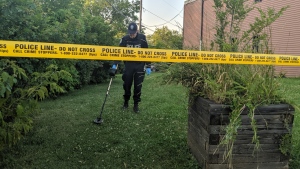 Terrorized and frustrated by eight shootings that occurred in their neighbourhood over the past month, residents of the Lawrence Heights neighbourhood met Thursday night to vent their frustrations and ask for help.

Parents and seniors are meeting tonight at the community centre on Replin Road to voice their concerns to community leaders including Toronto Police Chief Mark Saunders, who recently announced a new three month plan to tackle the rising number of shooting incidents across the city.

Organizer Kisa Hamilton says her neighbourhood has borne the brunt of the gunplay like no other area of Toronto.

“What we experienced in the past three weeks, it’s ridiculous. No other community has experienced this level of shooting for this population size.”

Between July 15 and July 30, police were called to seven separate shooting incidents in the neighbourhood, injuring at least one person.

Two other people were hurt on Aug. 5 when they were shot near Flemington and Stockton roads.

Hamilton said the meeting will allow residents to offer suggestions to Saunders and other leaders, and also learn more about his plan, which is backstopped by $4.5 million in new provincial, city and federal money pledged earlier this week.

Hamilton said an additional shooting last Wednesday occurred right near where an elderly person was sitting.

“The mothers are not feeling safe, especially now when gun violence is plaguing us in the day. It used to be something that happened at night when we’re sleeping, now it’s when the kids are out riding their bikes.”

Meanwhile, law enforcement and political leaders remain divided on the prospect of a nationwide or Toronto-specific handgun ban.

Canada’s police chiefs came out against a ban Wednesday, saying most firearms used in crime are illegally obtained anyway, and Premier Doug Ford and Prime Minister Justin Trudeau have so far declined to support a ban.

Toronto Mayor John Tory and much of Toronto’s municipal council say they support a ban.