'It was something I wish I never had to see': Mother speaks about son attacked by bulldog 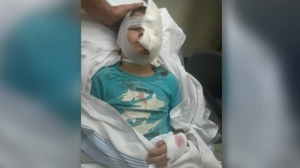 Justin Reid is seen being treated for his injuries while in hospital after the attack.

A mother is urging for an American bulldog to be put down after her nine-year-old son suffered serious injuries in a vicious attack.

Tania Reid said she received a phone call while at work saying that her son had to be airlifted to hospital from Simcoe County to The Hospital for Sick Children in Toronto after being attacked by the bulldog close to their home in September.

She said she was “terrified” and “confused” when she saw her son Justin Reid arrive on a stretcher at the hospital.

“He was bandaged and bleeding,” she said. “He was quiet. He was probably in shock. It was something I wish I never had to see.”

“His left eyelid – his bottom portion – had been peeled away from his face. His tear duct was completely severed. At that point in time they didn’t know if they would be able to fix it. He had a gash on his left cheek by his eyebrow, (it was) quite deep.”

The child also suffered injuries to his back and arm in the incident.

After the incident, Tania Reid said the bulldog “needs to be put down” as it poses a “threat” to other children in the area.

The incident took place on the driveway of a family’s home after the dog escaped. The kids of the home frequently played outside with Justin Reid and his brother.

According to Tania Reid, the family has only owned the five-year-old bulldog for a few months so it is not known if the dog has a history of any prior attacks.

Following the attack, the dog was quarantined to be check for rabies but was later returned to the owners.

When CTV News Toronto approached the home where the dog was, the woman inside said she did not want to speak about the matter at hand.

Tania Reid said she is very happy that her son is going to be alright but still feels “very angry” about the situation.

Three weeks after the incident Justin Reid was able to return back to school in good health.

Speaking with the Ontario Provincial Police about the matter, they said a charge under the dog owner’s liability act is before the court and if convicted the owner could face a fine of up to $10,000 or six months in jail.

Justin Reid is seen being treated for his injuries while in hospital after the attack.