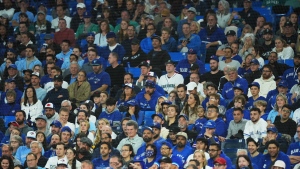 Alek Manoah gazed into his locker-room stall with a despondent look. Jordan Romano sat in his chair and slowly let out an expletive before untying his cleats.

An air of stunned resignation hung in the air Saturday night as the Toronto Blue Jays tried to absorb a wild-card series elimination none of them saw coming.

Armed with a seven-run lead and a boisterous sellout crowd, a Game 2 victory seemed to be in the bag when Toronto led Seattle 8-1 after five innings. But it fell apart in remarkable fashion as the Mariners used two four-run frames to tie the game before adding another run in the ninth inning for a 10-9 win.

"It was a heavyweight match that was just back and forth," said Blue Jays catcher Danny Jansen. "There were punches thrown all game. It was a tough one."

Instead of planning for a decisive Game 3 on Sunday, it was a two-and-out playoff exit for the Blue Jays for the second time in three years.

"It's really hard," said Blue Jays slugger Teoscar Hernandez. "There's nothing I can say that's going to make me feel better for a while."

Hernandez hit two homers to help power the Blue Jays to their big early lead. But Carlos Santana hit a three-run shot in the sixth inning and J.P. Crawford lifted a bases-loaded blooper in the eighth off Romano that brought the Mariners all the way back.

Shortstop Bo Bichette ran into shallow centre field as George Springer sprinted in and they collided as the ball found the turf. Three runs scored on the play as the Seattle dugout erupted at their good fortune.

Springer was shaken up on the play and was later taken off the field on a golf cart. Manager John Schneider said Springer spoke to his teammates after the game and will be OK, but did not provide injury details.

"That ball, two feet farther back it's probably caught and two feet in and it's caught," Romano said. "But that's baseball. Bounces don't go your way all the time."

Cal Raleigh doubled off Romano in the ninth inning and scored the go-ahead run when Adam Frazier lashed a two-out double into the right-field corner.

George Kirby earned the save to seal Seattle's two-game sweep. The Mariners partied on the infield with family members and team officials for more than an hour after the game.

"We don't quit. We haven't quit all year," said Mariners manager Scott Servais. "There's a certain resolve that our group has. They just believe in each other."

The Blue Jays were left to console each other with hugs and well-wishes in their locker-room.

"It's a special group," Schneider said. "A group that's going to be together for a while. Right now it's just tough, but the guys are going to be better for it."

The Blue Jays were swept by Tampa Bay in the wild-card round in 2020 and missed the post-season last year.

The Mariners and Houston Astros will open the best-of-five American League Division Series on Tuesday in Texas.

Raleigh scored three runs and had three of Seattle's 13 hits. Jansen had three hits and drove in two runs for the Blue Jays while Santiago Espinal and Alejandro Kirk added two hits apiece.

Gausman left his last regular-season start after three innings with a cut on the middle finger of his throwing hand. He showed no ill effects in the late-afternoon start and was in full control in the early going.

He got some defensive help from Bichette, who made a stellar catch in the second inning that put a charge into the crowd of 47,156.

He timed a jump perfectly to snag a liner from Frazier and Gausman followed with two strikeouts. The spark carried over into the bottom half of the frame.

Kirk led off with a double and Hernandez launched a rainbow blast for his first career playoff homer.

Ray inked a long-term deal with the Mariners after winning the AL Cy Young Award last year with Toronto. He was booed before the game and fans derisively chanted his first name at times.

He gave up another leadoff double in the third as Espinal stroked a pitch into the left-field corner. Vladimir Guerrero Jr., scorched a single up the middle to make it 3-0.

Hernandez belted a first-pitch fastball over the wall in the fourth inning to end Ray's day. The veteran southpaw gave up six hits and four earned runs with four strikeouts.

Gausman, meanwhile, set down 10 Mariners in order before giving up a leadoff single to Frazier in the fifth.

Santana followed with a double that bounced off the top of the wall in centre field and stayed in the park. Frazier went to third and scored on a Jarred Kelenic sacrifice fly.

The Blue Jays started to pull away with four runs in the bottom half. Toronto loaded the bases on an Espinal single, Bichette double and intentional walk to Guerrero.

All three players would score — on a passed ball, hit batsman and sacrifice fly, respectively — before Jansen drove in Kirk with a double to make it 8-1.

Reliever Diego Castillo took over from Paul Sewald and hit Whit Merrifield in the head with his first pitch. Merrifield was examined by a trainer and took first base but was later replaced in left field by Raimel Tapia.

The Mariners loaded the bases in the sixth but Gausman responded by getting a strikeout and pop fly. Schneider turned to the bullpen and Gausman received a standing ovation as he walked to the dugout.

Left-hander Tim Mayza came on and gave up a run on a wild pitch. Santana brought home the other runners with his first homer of the playoffs.

"You trust the guys that got you here," Schneider said of his bullpen management. "You trust your entire roster. Today we didn't get it done and they beat us. That sucks right now.

"But again, the guys that did the job they did to get here, I'll never have any fear about putting them in again."

Jansen stroked an RBI single in the seventh inning to pad Toronto's lead. Seattle scored a run off Anthony Bass in the eighth and put two runners on with nobody out.

Romano, from Markham, Ont., came on and gave up a single to Frazier that loaded the bases. The Toronto closer fanned Santana and Dylan Moore before Crawford's game-tying blooper.

Jackie Bradley Jr., replaced Springer in centre field. Bichette stayed in the game and reached third base in the bottom of the eighth but was left stranded on a Kirk groundout.

Matt Chapman reached on a one-out walk in the ninth but Kirby struck out Jansen and got Tapia on a fly out to end a rollicking game that lasted four hours 13 minutes.

Espinal, who missed the last two weeks with an oblique injury, got the start at second base. Jansen was behind the plate while Kirk moved to designated hitter.

Manoah took the Game 1 loss on Friday as Seattle blanked Toronto 4-0 in the Blue Jays' first home playoff game since 2016.

The Blue Jays won 92 games in the regular season — two more than Seattle — and secured the top wild-card seed with a few games left in the season. That allowed Toronto to rest some core players and line up their starters to pitch on regular rest.

But it didn't pay off against the Mariners, who travelled across the continent and weren't intimidated by the boisterous Toronto crowds.

"You've got to tip your cap," Chapman said. "Everybody except one team is always pissed at the end of the year. So unfortunately it happened to us a little earlier than we wanted it to."

The Blue Jays haven't won a playoff series since 2016 when they reached the AL Championship Series for the second straight year. Toronto last won the World Series in 1993.

Seattle ended a 21-year playoff drought this year. It was the first time the 1977 expansion cousins have played each other in the post-season.