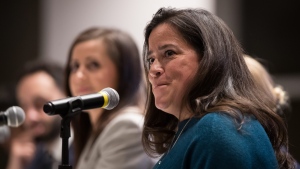 Independent candidate for Vancouver-Granville, Jody Wilson-Raybould, listens during an all candidates town hall meeting in Vancouver, on Thursday October 10, 2019. THE CANADIAN PRESS/Darryl Dyck

OTTAWA -- The SNC-Lavalin affair cost Justin Trudeau two cabinet ministers, his most trusted aide, the top federal public servant and possibly a second majority mandate; and now the woman at the centre of it all -- Jody Wilson-Raybould -- is the 2019 Newsmaker of the Year.

The former justice minister was the runaway choice of news editors across the country surveyed by The Canadian Press.

Prime Minister Trudeau, whose Liberal government was reduced to a minority in the Oct. 21 election, polled a distant second.

"Jody Wilson-Raybould made us think about governance and fairness and loyalty and how all of those things play out every day behind the scenes on Parliament Hill," said Toronto Star senior editor Janet Hurley.

"She lifted the curtain and let us see inside and, as the election results ultimately revealed, not everyone liked what they saw. Some called her courageous; others were less kind -- but in the face of all that she created a national dialogue unmatched this year."

This time last year, Sun News editor-in-chief Mark Towhey said, "The number of Canadians who could tell you who Jody Wilson-Raybould was would fit in a mid-size restaurant.

"In 2019, she became a household name at the centre of the biggest political story of the year."

It began with an anonymously sourced story in the Globe and Mail in early February, alleging that Trudeau and his staff had inappropriately pressured Wilson-Raybould to stop a criminal prosecution of SNC-Lavalin, the Montreal engineering giant facing corruption charges related to contracts in Libya.

It suggested Trudeau's demotion of Wilson-Raybould, Canada's first Indigenous justice minister, to Veterans Affairs in a mid-January cabinet shuffle was punishment for her refusal to override the director of public prosecutions, who had declined to negotiate a remediation agreement -- a kind of plea bargain in corporate-corruption cases -- for SNC-Lavalin.

The controversy quickly spiralled out of control for the government.

Within a week, Wilson-Raybould resigned from cabinet. Less than a week after that, Trudeau's long-time friend and most trusted political adviser, Gerald Butts, resigned as the prime minister's principal secretary.

The controversy dragged on for months and would eventually trigger the early resignation of the top public servant, Michael Wernick, and prompt senior minister Jane Philpott to resign from cabinet in solidarity with Wilson-Raybould.

In almost four hours of explosive testimony before the Commons justice committee, Wilson-Raybould detailed what she described as relentless pressure to intervene in the SNC-Lavalin case from Trudeau, senior staff in the Prime Minister's Office and Finance Minister Bill Morneau and his aides. She accused Wernick of issuing veiled threats, on behalf of Trudeau, that her refusal to comply could cost her her job as justice minister and attorney general.

She would later reveal that she had secretly recorded a phone conversation with Wernick -- a revelation that proved to be the last straw for her former Liberal colleagues. At the behest of Liberal MPs, Trudeau booted both Wilson-Raybould and Philpott from the governing party's caucus and informed them they would not be allowed to seek re-election under the Liberal banner.

Trudeau, Butts, Wernick and others maintained they'd done nothing wrong, that their conduct was entirely within the law and motivated solely by the desire to protect the thousands of innocent employees, shareholders, pensioners and others who could be hurt if SNC-Lavalin were to be convicted criminally and forced to scale back its Canadian operations or relocate to another country.

Although she felt it was inappropriate to pressure the attorney general, who is supposed to be independent and above partisan considerations, Wilson-Raybould herself said she didn't think anyone had done anything illegal.

But for opposition parties, just months away from an election, it was the gift that kept on giving. The Conservatives asked the RCMP to investigate possible obstruction of justice. The NDP demanded a full public inquiry.

In August, a month before the start of the campaign and just as Liberal poll numbers had begun to recover somewhat from the downward plunge precipitated by the SNC affair, federal ethics commissioner Mario Dion issued a scathing report that concluded Trudeau violated federal ethics law by improperly pressuring Wilson-Raybould.

Just this month, she was in the news again for refusing to move out of the offices on Parliament Hill assigned to her when she was a minister.

Some news editors surveyed saw Wilson-Raybould as an inspiring example -- "a beacon of hope" who spoke "truth to power" and left Trudeau's feminist credentials in tatters.

"She chose principle over politics and will not be soon forgotten for staying true to her convictions, regardless of the consequences," said Danny Kingsbury, national format director for Rogers Media.

Others took a more nuanced view.

"The Wilson-Raybould saga laid bare for many Canadians the sort of wheeling and dealing that goes on inside governments -- a necessary evil if you buy the prime minister's arguments, a corruption of the justice system if you accept her viewpoint," said Christina Spencer, editorial page editor at the Ottawa Citizen.

Either way, the scope of the story and its repercussions left little doubt among news editors that the woman at the centre of it was this year's dominant newsmaker. She may well continue to influence events as the SNC-Lavalin case makes its way through the judicial system and Wilson-Raybould's successor as justice minister, David Lametti, grapples with whether to order a remediation agreement.

As Spencer put it: "It involved Quebec, jobs, justice, a woman, an Indigenous cabinet minister, two senior officials who had to leave their jobs -- and the issues that loom ahead have yet to be resolved."

This report by The Canadian Press was first published Dec. 18, 2019.

Independent candidate for Vancouver-Granville, Jody Wilson-Raybould, listens during an all candidates town hall meeting in Vancouver, on Thursday October 10, 2019. THE CANADIAN PRESS/Darryl Dyck