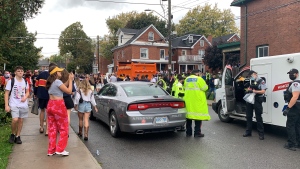 Local police say one officer was taken to hospital for treatment of undisclosed injuries after being hit with some form of projectile.

Investigators linked the officer's injuries to a crowd of thousands they said swarmed the city's university district Saturday afternoon.

Police declared the gathering an “aggravated nuisance party” using a bylaw that allowed them to fine attendees up to $2,000 each, but said they were able to lift that declaration Saturday evening.

Police haven't said whether anyone else was hurt, or what charges may be pending, but they confirmed that additional officers from the Brockville, Ont., city police force and Durham Provincial Police were called in to help with crowd control.

Queen's University opted against holding its typical in-person homecoming event this weekend for a second year in a row due to the COVID-19 pandemic, but unofficial festivities went ahead anyways.