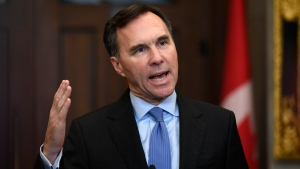 Minister of Finance Bill Morneau makes an announcement on lowering taxes for the middle class in the Foyer of the House of Commons on Parliament Hill in Ottawa, on Monday, Dec. 9, 2019. THE CANADIAN PRESS/Justin Tang

OTTAWA - The Liberal government says Canadians would begin to see the impact of a proposed tax cut on their first pay stubs of the new year - as long as the party can get enough political rivals to help them deliver on one of their major campaign promises.

On Monday, Finance Minister Bill Morneau introduced a motion in the House of Commons to raise the basic personal income-tax exemption to $15,000, which was part of the platform the Liberal party put forward in its bid to keep power in the October election.

The amendments to the Income Tax Act would start taking effect next year, but the Liberals need to get them through a vote.

Measures involving government finances are ordinarily treated as confidence votes. Since the Liberals hold only a minority of seats, securing enough votes for the motion to pass would also mean they would get to remain in power.

“We look forward to working with the other parties,” Morneau said Monday when asked how confident he was of the result.

“It's obviously something we campaigned on and we look forward to having this effective on (Jan. 1), 2020.”

The proposed changes would be fully implemented by 2023.

The benefit would also be gradually reduced for people making more than $150,473 in net income in 2020.

“We're doing it in a way that's means-tested so it doesn't actually impact the top one per cent,” Morneau said.

Morneau also said about 20 million Canadians will pay less tax and 1.1 million more Canadians would pay no federal tax at all.

The existing basic personal income-tax exemption for 2020 and the proposed amendments would raise it to $13,229 next year.

The Liberal government estimates the tax break would amount to savings of nearly $300 for individuals and nearly $600 for families every year.

The New Democrats said they would like to see the Liberals adjust their plans by making sure the proposed tax cut is done in such as way that all benefits go to those earning less than $90,000 a year, with a phase-out beginning for those with annual incomes of $80,000.

The NDP said this would bring down the price tag of the tax cut by $1.6 billion, which the party said it could divert to dental care.

“We know that relieves pressure on the health-care system and we know that it will make a terrific difference in the lives of those families,” Peter Julian, the NDP finance critic, told reporters Monday.

When asked about the NDP proposal, Morneau said again he looks forward to working with the other parties, but noted the Liberals campaigned on a promise to deliver the tax cut.

“It's a very significant measure that will put, you know, in the first year, $3 billion more money into middle-class Canadians' pockets,” Morneau said.

The Conservatives had also promised a broad-based tax break during the fall election campaign, pledging to cut the tax rate on the lowest federal income bracket from 15 per cent to 13.75 per cent over four years. They said that would save a couple earning average salaries about $850 a year.

Morneau also promised a report on federal finances before MPs head home for the holidays.

“Our plan is to have a fiscal update before Christmas so we can update Canadians on the state of the economy,” Morneau said.

Over the weekend, the Conservatives called on Morneau to provide a fiscal update immediately as economic concerns mount following a poor jobs report late last week.

Morneau did not offer a specific date for when he would provide the update.