Liberals’ pledge to ban assault rifles a step in the right direction: Tory 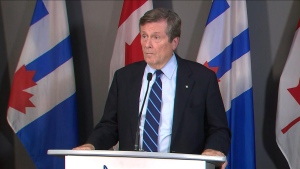 Toronto Mayor John Tory is calling the Liberals’ pledge to ban assault rifles an important step in the fight against gun violence.

“The initiative announced today would ban assault weapons - that is a step in the right direction,” Tory said during a press conference on Friday.

Liberal Leader Justin Trudeau said his government is promising to ban all military-style assault rifles as part of broader gun control measures. He also proposed to work with provinces and territories to give municipalities the right to ban handguns.

Trudeau made the announcement in the Toronto-Danforth riding, where two people died and 13 others were injured in a shooting rampage last year.

The announcement comes a day after another fatal shooting in the city. A 25-year-old man was shot and killed in the area of Middlefield Road and McNicoll Avenue in Scarborough on Thursday night.

According to Toronto police data, as of Sept. 15, there have been 311 shootings so far this year, with 468 victims. A total of 24 people have died due to these shootings.

Tory said the initiative is a step toward tighter gun control. He said the city will look into the possibility of a citywide handgun ban and how it could help to keep Torontonians safe.

He said the city will work closely with the province if such authority is indeed given to municipalities.

“We will not stop to continue to advocate... for a national handgun ban, along with our allies in this, which include the families and friends of those who have lost their lives or have been seriously injured by gun violence, and the doctors and nurses who have been working hard to bring about gun control,” said Tory.

The mayor said he is looking forward to seeing what other federal parties will be proposing to address gun violence if they get elected.

Tory said he will also support other measures which will make a difference, big or small, in getting guns off city streets. These include tougher bail conditions and investing in programs for kids and families

“We must see a stronger community voice represented in the justice system, and we need to see a greater emphasis on stopping gun smuggling across the Canadian border. I’m not prepared to rule out any measure that will make a difference in getting these guns off our streets.”