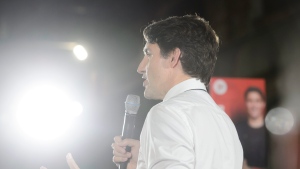 The federal Liberals say they will evaluate all existing and future government policies for their impact on disabled residents if voted back into power next week.

The pledge from Carla Qualtrough, the Liberals' minister for accessibility issues, comes days before Canadians head to the polls on Oct. 21 and shortly after disabled voters raised concerns about the lack of discussion of issues affecting their lives during the current campaign.

The Liberals released a disability equality statement earlier this week, a document that was not in their original platform.

Qualtrough clarified its contents in an interview with The Canadian Press, saying the party was committing to applying a disability lens to government decisions, a formal consideration of how each would affect people with disabilities.

The Liberals mandated that all policies be subjected to a gender-based analysis over the past several years, assessing whether government policies are affecting men and women in different ways.

Qualtrough says the Liberals would take the same approach with disability, reviewing existing policies and studying new ones to make sure government moves don't exclude or adversely affect anyone.

Qualtrough said such analysis would build upon the Accessible Canada Act, the country's first federal piece of accessibility legislation, which passed into law in June. The act was the fulfillment of a 2015 Liberal campaign promise and is widely seen as a milestone in disability rights, though dozens of advocacy groups have expressed concern that it's currently too weak to be effective.

Qualtrough said a re-elected Liberal government does not plan to amend the law, but said a disability lens would offer additional safeguards. The party's new equality statement also pledges timely implementation of the new act.

The Liberal announcement earned praise from the Council of Canadians with Disabilities, a national advocacy group that has been calling for such analysis for years.

During the national consultation that led to the ACA, council members argued the government needed to duplicate the approach used for gender when considering disability issues.

The Liberals applied "gender-based-analysis-plus," which extends to characteristics such as age, religion and ethnicity, to a federal budget for the first time in 2017 and mandated it be used across the board. But internal documents obtained earlier this year showed fewer than half of departments and agencies had GBA+ plans in place.

Council spokesman John Rae said adopting the same approach for disability would be an "important practice" that may ensure disabled voices are heard even if they aren't in the room to speak up for themselves.

"We aren't present in sufficient numbers in places where decisions about important aspects of life are made," Rae said. "It's very easy for our needs to get overlooked if not consciously ignored."

Rae declined to comment on the timing of the Liberal announcement, but said he hoped other parties would follow suit.

Despite the recent passage of the ACA, neither the Liberals nor the other federal parties had made significant reference to disability issues for the bulk of the election campaign.

The Green party did not respond to request for comment on accessibility measures, and the People's Party of Canada said its platform contained "no policy related to disabled persons."

The NDP did not provide comment to The Canadian Press, but made several commitments to strengthen the Accessible Canada Act in a letter sent to an Ontario-based disability advocacy group.

"The Liberals hailed this bill as a historical piece of legislation. But without substantial amendments, it is yet another in a long line of Liberal half-measures," reads the NDP's letter to the Access for Ontarians with Disabilities Act Alliance. "New Democrats are committed to ensuring that C-81 actually lives up to Liberal party rhetoric."

The Conservatives, too, pledged to "work closely with the disability community to ensure that our laws reflect their lived realities."

At a Thursday campaign stop in Brampton, Ont., leader Andrew Scheer said his party would implement the ACA and criticized the Liberals for their handling of other disability-related files.

"We made commitments to make it easier to qualify for the disability tax credit, something that Justin Trudeau's government made harder especially for people with Type 1 diabetes," he said.

While campaigning in Trois-Rivieres, Que., also on Thursday, Trudeau said his government's approach was about "fundamental equality," adding there is more to be done to achieve that goal.

Some disabled voters expressed concerns about the handful of relevant promises that have been put forward on the campaign trail. In addition to pledging expanded eligibility for the disability tax credit, the Conservatives have said they would implement a $50-million national autism strategy focusing on research and services for children. The NDP and Greens have followed suit with similar proposals and larger pots of cash.

While widely lauded among parent-led advocacy groups, some autistic adults said they'd prefer to see their concerns addressed in a broader strategy focusing on disability as a whole.

"We face similar issues that people with other disabilities face," said Anne Borden of the self-advocacy group Autistics For Autistics. "We all need access, human rights, dignity, self-determination ... We have more in common across our disabilities than any differences."

Qualtrough said she, too, favours that approach.

"I am very much a proponent of a more overarching strategy that includes everyone and doesn't focus on diagnosis," she said, adding that research focusing on individual disabilities still has value and should be encouraged.

This report by the Canadian Press was first published on Oct. 18, 2019