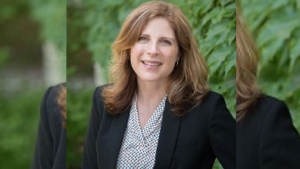 Amy Walby has stepped down as Chair of LHSC's Board of Directors. (LHSC)

TORONTO - A top official at a major hospital in London, Ont., announced her resignation on Thursday, a day after the facility's CEO sued for wrongful termination related to his travels to the United States.

In a statement, Amy Walby said her resignation as chairwoman of the board of directors at London Health Sciences Centre was not an admission of wrongdoing.

“While I stand firm in my belief and understanding that I did nothing wrong, my resignation is a reflection of my deep commitment to doing what is best for the greater good,” Walby said.

Walby's resignation follows a lawsuit launched by Dr. Paul Woods, who was terminated Jan. 10 - just three years into his five-year contract - amid controversy over his trips to the U.S.

In his untested statement of claim, Woods alleges the hospital terminated him in bad faith, defamed him, and discriminated against him. His suit seeks a total of $2.5 million in various damages.

The hospital, he says, has painted him with the same brush as used after “discoveries of recent leisure trips by politicians, health-care leaders, and health-care professionals” over the Christmas holidays.

“The board knowingly and deliberately created this impression to attempt to spare itself from criticism, while inaccurately attempting to shift blame and responsibility to Dr. Woods,” his suit alleges.

Woods, a Canadian citizen with permanent residency status in the U.S., began his five-year contract as the health centre's CEO in January 2018. His immediate family, including his fiancee, live in Michigan.

His lawsuit says the federal government's closure of the Canada-U. S. border to non-essential travel last March “imposed significant hardship” on him and his family by stopping them from visiting him in Ontario. However, as a green card holder, he was able to visit the U.S.

“Dr. Woods did not take the decision to enter the United States lightly,” his suit asserts.

The claim cites several instances in which he discussed the travel issue with Walby along with the need for an accommodation so he could work from home on his return from the U.S. Walby raised no objections in emails to him, saying she was supportive.

In all, Woods travelled to the U.S. five times since March, most recently in the week leading up to Christmas. He says he followed all public health guidelines.

After his most recent visit, the hospital put out a statement Jan. 8 saying the board was aware of the “extenuating” circumstances that prompted his travel. It expressed support for him but also said he would no longer travel until the border restrictions were lifted.

“What I can do is take accountability for my decision to visit with immediate family out-of-country and fully apologize,” Woods said in the same statement.

However, in announcing his termination, the board said it had no advance notice of his travels and did not approve them.

In its own statement on Thursday, the hospital said it recognized a “number of outstanding questions” remained regarding the termination.

However, it said Woods was terminated without cause, meaning the hospital was not alleging wrongdoing. It also denied his lawsuit allegations.

“Dr. Woods' travels to the U.S. were known by many people at the hospital and in the community, as Dr. Woods did not attempt to hide his whereabouts,” the hospital said.

At the same time, the hospital said the board never formally approved the travel, because there was no process for doing so.

“It was not until the Jan 8, 2021, meeting of the elected board directors that they were apprised of the full extent of the CEO's travel over the course of the pandemic,” the hospital said.

The hospital has appointed Dr. Jackie Schleifer Taylor as interim president and CEO.

- With files from Denise Paglinawan

This report by The Canadian Press was first published Jan. 14, 2021.