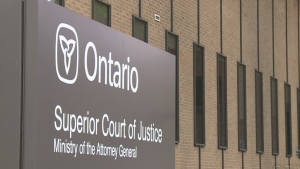 A seasoned police officer who failed to provide medical help for an Indigenous woman following a deadly drug overdose will be spending the next 12 months in jail, a southern Ontario judge ruled Monday.

The sentence against Const. Nicholas Doering comes nearly a year after he was deemed responsible for the death of Debra Chrisjohn, who died while in the London, Ont., police officer's custody in September 2016.

Ontario Superior Court Justice Renee Pomerance convicted Doering of failing to provide the necessaries of life and criminal negligence causing death, saying at the time he was partially influenced by stereotypes about drug users when he failed to summon medical help for Chrisjohn and lied to fellow officers about her condition.

In handing down her sentence on Monday, Pomerance said she strove to strike a balance between the non-custodial sentence sought by Doering's defence lawyer and the crown's request that the nine-year veteran of the city's police force spend up to two years in jail.

She said that while she had to account for what she described as Doering's evident remorse, his mental health and the increased restrictions he would face as an inmate due to COVID-19, time in custody was the only appropriate punishment for Chrisjohn's death.

“This case calls for a sentence of real jail,” Pomerance wrote in her decision. “Nothing short of that can reflect the gravity of the offences in this case. The sentence imposed by court must denounce, in the strongest terms, the conduct of the offender, and the resulting harm. It must reinforce the societal values that were breached: the sanctity of human life, the right of all persons to a minimum standard of care, and the duty of police to treat all persons in their custody with respect and humanity.”

Court heard Doering and another London police officer crossed paths with Chrisjohn in September 2016 after receiving numerous reports that an agitated woman was trying to enter cars and wandering into traffic.

While arresting Chrisjohn and communicating with fellow officers, Doering realized that the 39-year-old was wanted on an outstanding warrant issued by the Ontario Provincial Police.

Pomerance said officers from both forces agreed to meet to transfer Chrisjohn into OPP custody, and Doering was assigned to drive her to a rendezvous with provincial officers.

Court heard Chrisjohn was alert and conscious when Doering put her in the back of his cruiser. Before Doering drove off, court heard a paramedic observed Chrisjohn through the cruiser window but said any checks of her vital signs would likely be skewed due to the fact that she was high on methamphetamine.

Over the next 45 minutes, court heard that Chrisjohn's condition deteriorated significantly. She went from sitting upright and talking to lying on her side while moaning and shaking.

In summarizing Doering's testimony, Pomerance said the officer stopped the cruiser once, but only to ensure that Chrisjohn had not slipped out of her handcuffs.

The gravity of Chrisjohn's condition became evident in a video prosecutors presented at trial, Pomerance wrote. She summarized the video as showing a limp, motionless Chrisjohn being dragged into the cells at an OPP detention centre.

She was eventually taken to a hospital in St. Thomas, Ont., for treatment, but pronounced dead that evening. Court heard her death was caused by a heart attack related to a methamphetamine overdose.

Pomerance ruled that more prompt medical attention could have saved Chrisjohn's life, and said Doering should have tried to obtain it for her.

“Const. Doering had pre-conceived notions about drug users and he held fast to those notions when dealing with Ms. Chrisjohn,” she wrote when handing down her verdict, noting Indigenous women are particularly vulnerable to such stereotyping.

Doering's lawyer, Lucas O'Hara, argued the officer has been diagnosed with post-traumatic stress disorder stemming from Chrisjohn's death and the ensuing trial. He contended jail time would take too much of a toll on Doering's mental health and he should face a conditional sentence instead.

While Pomerance described the public condemnation Doering has faced as a mitigating factor, she said his “wreckless disregard” for Chrisjohn's well-being demanded a harsher sentence.

A statement issued by Doering's legal team announced he had launched an appeal of his convictions and laid out one of the issues it intends to raise when challenging his guilty verdict.

“It will be impossible to find a one-size fits all solution to the problem of engaging police officers in the assessment of the changing medical risks posed by intoxicated persons,” it read. “Best efforts to replace the discretion exercised by officers with an objective matrix of observations to direct their response will still suffer from a material risk of failure.”

London Police Chief Steve Williams said in a statement that Doering will be suspended with pay.