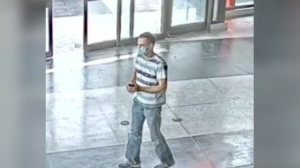 An image of a male suspect wanted in a June 27 assault outside Victoria Park Subway Station.

Toronto police have released a security camera image of a man wanted in an assault investigation at an east-end TTC station.

The incident happened on June 27 at about 3:35 p.m., at Victoria Park Subway Station, which is just north of Danforth Avenue.

According to police, a 49-year-old man was smoking outside the station at around 3:30 p.m. when he got into a brief verbal interaction with another man.

Investigators allege the other person then assaulted the 49-year-old “numerous times.”

The victim was taken to hospital with serious injuries, but was later released, they said.

The suspect is described as having a medium build with dark wavy hair.

He was last seen wearing a blue and white horizontal striped shirt and blue jeans, grey runners with white soles, and carrying a cellphone with headphones.