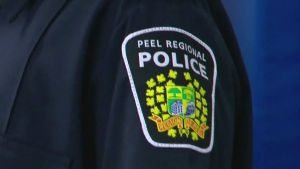 A 26-year-old man is in hospital with a non-life-threatening gunshot wound after he was shot in the central part of Brampton early on Tuesday morning.

Peel Regional Police say they were called to the corner of Nuttall Street and North Park Drive in Brampton at about 4:35 a.m. for reports of shots fired nearby.

They arrived to find the man suffering from a single gunshot wound.

Officers conducted a search of the scene but said no suspect information was available.