Man, 29, charged after elderly man struck and killed by vehicle in Scarborough 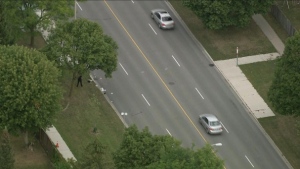 A 29-year-old man has been charged after an elderly man was struck and killed by vehicle in Scarborough in September.

Emergency crews were called to the area of Warden Avenue and McNicoll Avenue at around 6:30 p.m. on Sept. 6 for a report of a collision.

Police said a 97-year-old man was crossing Warden Avenue, north of McNicoll Avenue, when he was struck by the driver of a Honda Civic travelling south on Warden Avenue.

He was rushed to a trauma centre but succumbed to his injuries on Sept. 24.

Following an investigation, police have charged driver, who has been identified as Toronto resident Rajeev Menon. with failing to stop at scene of accident causing death and careless driving causing death.

Menon is scheduled to appear in court on Friday.