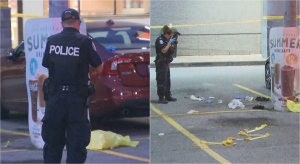 Police investigate after a shooting at a plaza near Highway 401 and Weston Road on August 20. (CTV News Toronto)

A 61-year-old man found with gunshot wounds in a parking lot in the northwest end of the city earlier this week has died, police say.

The incident occurred near Weston Road and Highway 401 shortly before 11 p.m. on Monday.

Police say the victim was rushed to hospital in critical condition.

On Wednesday, police said that the victim has died of his injuries and that the incident is now being investigated as Toronto’s 39th homicide of 2019.

He has been identified by police as Minh Le, of Toronto.

Police have described the suspect as a black male in his early 20s, who had black hair and was seen wearing black prescription glasses, black clothing, and a shirt with “Versace” written on the front.

He was last seen fleeing northbound.

Police investigate after a shooting at a plaza near Highway 401 and Weston Road on August 20. (CTV News Toronto)