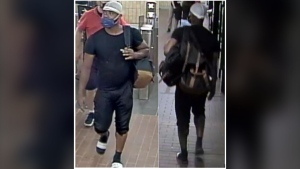 Police are searching for a suspect who allegedly assaulted a drug store employee for enforcing masking rules.

Police are searching for a man accused of punching and stomping on a downtown drug store employee for enforcing masking rules.

The incident happened at a store in the area of Yonge and Carlton streets around 4:45 p.m. on June 17.

Police say an unknown man entered the establishment and he became involved in an interaction with a store employee about his face mask.

The man, police say, became agitated and was escorted out of the store.

When they were outside, the man allegedly punched the employee and then stomped on his head.

Police say the employee was taken to hospital in serious condition, possibly with life-altering injuries.

On Wednesday, police released images of the suspect, who is described as between six-foot to six-foot-two with a muscular build.

He was wearing a black t-shirt, black shorts, black socks, black sandals, a blue face mask, and a white do-rag on his head. In addition, the suspect was carrying a black and brown bag.