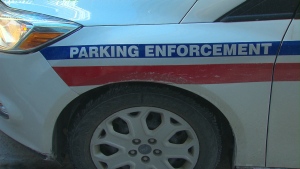 A parking enforcement vehicle is shown in an undated file photo.

A man has been charged in connection with the alleged assault of a parking enforcement officer in Toronto’s west end on Tuesday.

Police say that at around 5:30 p.m., a male driver assaulted a parking enforcement officer that was conducting rush hour enforcement near Eglington Avenue West and Oakwood Avenue.

The enforcement officer allegedly asked the driver, who had stopped at a posted ‘No Stopping Rush Hour Route,’ to move along but the driver did not move the vehicle.

The officer wrote a ticket and the driver then allegedly exited his vehicle and hit the officer’s hands, knocking the ticket issuance device to the ground.

Police say the driver remained at the location until police officers arrived.

Shaiyaa Sprackman, 33, of Binbrook Ontario, was arrested and charged with assault of a peace officer.

He was released and is scheduled to appear in court on Nov. 4.