Man dies in hospital after shooting in Mississauga earlier this week 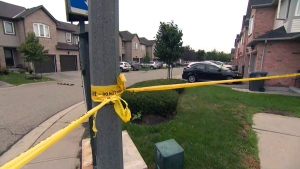 A 25-year-old man has died in hospital after being critically injured in a shooting in Mississauga, Ont. on Monday night.

Emergency crews were called to a townhouse complex on Guildwood Way and Huntington Ridge Drive, east of Mavis Road, just after 9:30 p.m. after receiving reports of shots fired.

Police said that when officers arrived at the scene they found a male victim suffering from a gunshot wound. He was rushed to a trauma centre in life-threatening condition.

On Wednesday, police confirmed that the victim, who has since been identified as Mississauga resident Abdifatah Salah, had succumbed to his injuries.

Earlier this week investigators told reporters that they didn’t believe Salah knew anyone in the nearby residence.

"I have not been made aware if he's actually residing at the residence where he was located," Peel police Const. Sarah Patten said.

The Homicide and Missing Persons Bureau have now taken over the investigation and are asking anyone with information or who may have dashboard camera surveillance of the area between 9 p.m. and 10 p.m. of that night to contact police or reach out to Crime Stoppers anonymously.