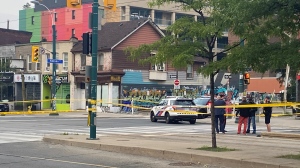 Police are investigating after a man was found suffering from stab wounds at a downtown subway station late Thursday night.

Investigators say the incident may have occurred on board a train and the victim exited the subway system at College Station.

According to paramedics, the victim, who is believed to be in his 20s, was transported to a trauma centre with non-life-threatening injuries.

Police have not released any information on possible suspects and no arrests have been made.