Man found with stab wounds inside car in Markham: police 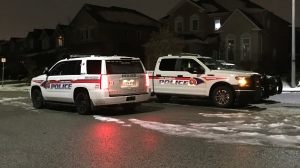 Police are investigating after a man was stabbed in Markham late Monday night. (Mike Nguyen/ CP24)

A man has suffered serious injuries after a stabbing in Markham late Monday night.

At around 11 p.m., a man was in his car on Treeline Court when he was approached by three suspects, York Regional Police say.

A video of the incident shows some type of altercation near the vehicle before three suspects flee to a nearby park.

The victim was found inside his vehicle suffering from serious but non-life-threatening injuries.

Police are asking anyone with information about the incident to contact investigators.