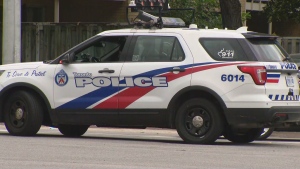 Toronto police are investigating a collision in Etobicoke.

A man was seriously injured after being struck by the driver of a vehicle in Etobicoke Friday afternoon.

Emergency crews responded to a collision at the intersection of Rathburn Road and The West Mall just before 2 p.m.

Toronto police say a man, believed to be in his 80s, fell over after he was struck and hit his head.

Officers arrived and located the man lying at the intersection conscious and breathing, police say.

He was taken to a local hospital with serious but non-life-threatening injuries.

The driver of the vehicle remained at the scene, police say.