Man in hospital after being stabbed in Brampton 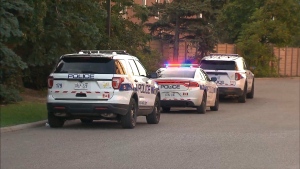 Police respond to a stabbing near Railroad Street and McMurchy Avenue North in Brampton Tuesday October 19, 2021.

A 41-year-old man was taken to hospital with serious injuries after being stabbed in Brampton Tuesday evening.

Emergency crews were called to Railroad Street and McMurchy Avenue North at around 5:30 p.m. for a stabbing.

Peel police said they found the victim conscious, while the suspect fled the scene. Paramedics transported him to hospital in serious but stable condition.

Police later said a 43-year-old suspect had been taken into custody in connection with the stabbing.