Man in hospital after daylight shooting at Pickering home 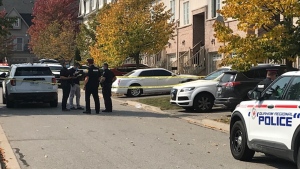 Police are seen in Pickering after a man was shot on Sept. 25, 2020. (Ron Dhaliwal/CTV News Toronto)

A 34-year-old man is in hospital after being shot at the steps of a home in Pickering in broad daylight.

Durham Regional Police said they received a call about a shooting at a home on Sheppard Avenue, near Whites Road, at around 12:30 p.m.

“I don't know exactly how many occupants were in the home but there were other parties, I believe a family, within that residence,” Const. George Tudos told CP24. “It happened right at the doorstep of the residents where the male was shot.”

Police said the victim was transported to a GTA trauma centre for treatment. There was no immediate word on his condition.

Tudos said the she shooting is “worrisome” as it happened in a busy area.

“There's a shopping centre in front of us and a daycare, and also a high school just across the road. So we are making sure that you know everyone is safe right now.”

He added that police believe the shooting may have been targeted.

“We don't believe that this is a random act,” Tudos said. “However, it is still an ongoing investigation so we are looking for any witnesses anyone that may have seen anything to contact our criminal investigations bureau.”

One suspect is currently outstanding. Police said he was wearing shorts, a black hoodie and a surgical mask. Police are also looking for a suspect vehicle described as a silver or grey 2004/2005 Dodge Caliber.

Anyone with information is being asked to contact investigators.

Police are seen in Pickering after a man was shot on Sept. 25, 2020. (Ron Dhaliwal/CTV News Toronto)