Man rushed to hospital after marine rescue near Cherry Beach 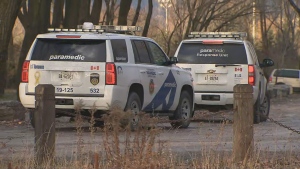 Emergency crews were called to Cherry Beach after reports of one person in the water in distress.

A man has been rushed to the hospital with life-threatening injuries after a marine rescue at Toronto’s waterfront, paramedics confirm.

Emergency crews were called the area of Cherry Street and Martin Goodman Trail around 3:15 p.m. after receiving reports of a person in distress.

Police said there were reports of five or six kite boarders on Lake Ontario at the time of the call.

Officers performed live-saving measures on one person and then transported them to the hospital, police said.

One other person was assessed at the scene by paramedics, but officials say no other injuries have been reported.

No further details have been provided regarding the circumstances leading up to the injuries.

Emergency crews were called to Cherry Beach after reports of one person in the water in distress.