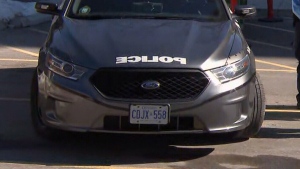 A man is in hospital in serious condition after being stabbed downtown Sunday afternoon.

Emergency crews were called to the area of Carlton and Parliament streets at around 2 p.m. for reports of a stabbing.

Police said the victim was stabbed following an argument with the suspect.

The victim was taken to a trauma centre with serious injuries, Toronto paramedics said.

Police said the suspect got on a streetcar but later exited the vehicle after it did not move.