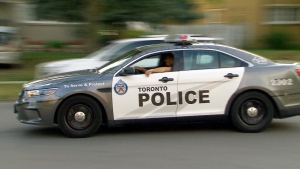 Toronto police say a man is in serious but non-life-threatening condition after he was shot in North York early on Tuesday morning.

Just after 1 a.m. Tuesday, police say they were called to a building near Willowdale and Byng avenues, east of Yonge Street for multiple reports of gunshots fired.

They later located a man behind the wheel of a car near Finch and Victoria Park avenues suffering from gunshot wounds.

Investigators say the victim was not cooperating and they did not have suspect information.