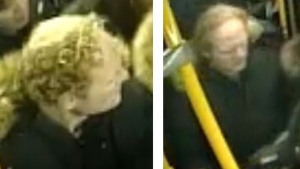 A suspect wanted in an assault aboard a TTC bus on Feb. 4, 2020 is shown in surveillance camera images.

Police have released surveillance camera footage of a man wanted after a woman was punched in the head aboard a crowded TTC bus in North York earlier this year.

For reasons unknown, a man near her on the bus "violently struck" her on the side of her head.

He then fled the bus in an unknown direction.

He is described as a white male, 30-40 years of age, partially balding with curly blond hair.

He was last seen wearing a black winter jacket.