A man struck by a vehicle downtown this morning has been taken to hospital for treatment.

The collision occurred near King and Sherbourne streets at around 7 a.m.

Police initially said that the male was struck after getting off of a streetcar in the area but the TTC has since denied that. 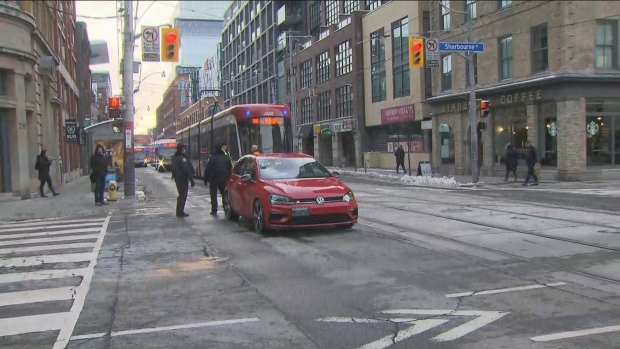 In a tweet, TTC spokesperson Stuart Green said the victim was not exiting a streetcar at the time.

Our thoughts are with the victim of a pedestrian/auto collision on King St. this morning. Our information is that the pedestrian was not exiting a #TTC streetcar when this happened, but we have an operator who witnessed the incident and is fully co-operating with police.

Police say the victim’s injuries are believed to be serious and he has been transported to a trauma centre.

Sherbourne Street was shut down in both directions between Adelaide and Front streets for several hours for the police investigation.