Man taken into custody after barricading inside Mississauga home 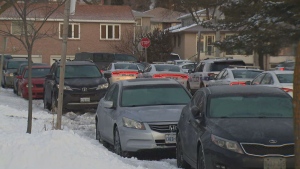 Peel police are investigating after a man barricaded himself inside a Mississauga home with a weapon Thursday morning.

Peel police said a man who was barricaded inside a Mississauga home has been taken into custody, ending a nearly 13-hour long negotiation.

Shortly before 7 a.m. on Thursday, police responded to reports of a domestic call at Lundene Drive and Cramer Street.

Police said a 27-year-old man has barricaded inside the home with a knife and has threatened to harm himself.

The family living at the residence safely left the home before officers arrived, police said.

The situation was contained to the residence, and police said there was no danger to the community.

Just before 5:30 p.m., police said crisis negotiators continue to communicate with the man to facilitate a peaceful surrender.

Police announced shortly after 7:30 p.m. that the incident was resolved, and the man has been arrested.

Peel police are investigating after a man barricaded himself inside a Mississauga home with a weapon Thursday morning.