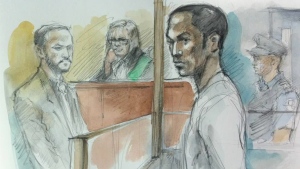 Nahom Tsegazab as depicted in a court sketch.

TORONTO - A man convicted of manslaughter in a deadly public shootout at an east Toronto block party is adjusting well to life in the community, officials say in granting him six more months of day parole.

In a decision released this week, the Parole Board of Canada says Nahom Tsegazab has respected the conditions of his release since it began this spring, and shows high levels of motivation, accountability and reintegration potential.

The board notes Tsegazab was released to a halfway home in late April, during the most restrictive period of the COVID-19 pandemic, but did not let that deter his efforts to find a job.

The two-member panel says he worked on his resume and took online classes during the lockdown and found work once the restrictions eased.

His newly extended release comes with the same conditions as the initial period, including that he remain employed and not contact any of the victims or their relatives.

Tsegazab, 27, is serving a sentence of more than 11 years after being convicted of two counts of manslaughter and six counts of aggravated assault in connection with the July 2012 shooting.

The incident took place at a crowded barbecue at a social housing complex and claimed the lives of 14-year-old Shyanne Charles and 23-year-old Joshua Yasay. It also sent 23 people to hospital.

Tsegazab was one of several gunmen involved, but it has not been determined who fired the fatal shots.

In its latest decision, the board said he showed a “significant level of insight” into the factors that contributed to his crimes.

Correctional Service of Canada staff have indicated Tsegazab no longer has the same values or beliefs as he did at the time of the incident, and that he currently has no contact with any of his former peers, the board said.

“You are insightful and committed to ensuring you do not return to these issues in the future,” the panel wrote.

“You have had no apparent issues in abiding by your conditions. You have presented no behavioural or criminal concerns, and have been making steady progress in adjusting to community life.”

The board said Tsegazab has requested to be transferred to an area closer to his family, and has the Correctional Service's support in that regard.

Tsegazab was granted day parole in March, but denied full parole because the board found he lacked community support.

At the time, the board said he had gained maturity behind bars, but raised concerns about some incidents that occurred during his time in prison, including one in which two kitchen knives were found in his unit.