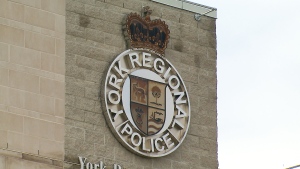 Investigators have arrested and charged an 18-year-old Markham man in connection with a fight last weekend at a Tim Hortons in that city that left two males with serious stab wounds.

York Regional Police say they were called to a Tim Hortons on Markham Road on Sunday night at about8:30 p.m., where they found a 21-year-old who had been stabbed.

They say they also found three other men they believe were involved in the incident, and one of them was also suffering from stab wounds.

Both injured men were taken to hospital for treatment.

Police say that four men got into a physical fight with a fifth man and the fifth man allegedly stabbed two members of the other group.

He then fled the scene.

On Monday, investigators say, they located a suspect identified as Danovan Fernandez and took him into custody.

He was charged with two counts of attempted murder and weapons dangerous.

Fernandez is currently in custody and will appear in court in Newmarket for a bail hearing on Friday.