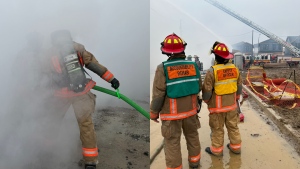 Hamilton Fire Department (HFD) Chief Dave Cunliffe says the blaze started just after 1 p.m. in a new subdivision under construction on Blackbird Way, off of Marion Street, in the city's Mount Hope neighbourhood.

When crews arrived, they reported a “well-involved” fire in multiple single family homes, and that one house had already collapsed.

Defensive firefighting techniques were initially employed, says the force, due to the “size and rapid spread of the fire.”

HFD utilized two aerial devices with large volume water streams in addition to numerous large volume hand line hoses for approximately thirty minutes to cut off the fire, but “not before it consumer four homes.”

Firefighters are currently extinguishing a fire that has damaged 4 homes under construction on Blackbird Way in Mount Hope #HamOnt. No injuries reported. Crews will be on scene most of the afternoon. pic.twitter.com/UIGCL78spY

A house directly adjacent to the fourth home, along with four homes directly across the street from the site of the fire, also sustained heat and water damage.

No one was injured, officials say, and the cause of the fire remains unknown.

Due to the significant damages, the Office of the Fire Marshal has been notified.