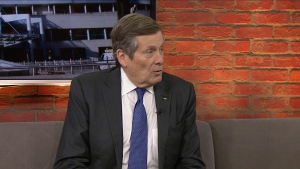 Mayor John Tory says that he will once again make transit and affordable housing his top priorities in the New Year and he is resolving that by the end of 2020 residents will actually start to see “visible signs” of key projects moving forward beyond just “a plan on a piece of paper.”

Tory made the comment during an interview with CP24 earlier this week, in which he reflected on the year that was and looked ahead to the New Year.

He said that in 2020 he wants to get to work on an ambitious 10-year plan to approve 40,000 new affordable housing units, which was approved by council last week but will require a $14.9 billion investment from other levels of government.

He said that his job is also to make sure that a new transit plan with the province “actually gets moving” and that in 2020 residents actually see work happening in the community on important projects that Queen’s Park has committed to fund, like the Ontario Line.

“In terms of what I will be focusing on it is really more of the same. I think if people heard me say that I had a brand new set of priorities for 2020 they would be worried about that. I mean if we had the affordable housing program completely solved then I would say I could move on but we don’t,” he said. “We have these federal and the provincial agreements, we have a housing plan that we passed at city council and my job is to make sure it actually happens and that the houses get built and that people can see them and live in them.”

Tory conceded that 2019 was a challenging year at times with the Ford government announcing billions of dollars in cuts to municipalities only to abandon much of them, at least for the coming year.

The mayor said that the cuts were a “real low point” for him because he thought at the time that the city was in for “four years of complete horror” where the province “gutted a lot of the programs that people rely on.”

Months later, he said that he is “making progress” on his relationship with Premier Doug Ford and is now having “good discussions” with him on a regular basis.

He said that the “real proof in the pudding” will, however, come with the release of the next provincial budget when many of the cuts aborted for 2020 could resurface.

Tory has mostly resisted calls to raise taxes beyond the rate of inflation but in 2019 he pivoted, championing an increase to the city building levy in order to raise billions of dollars for affordable housing and TTC state of good repair work.

The move irked some but was largely applauded by members of council, some of whom had repeatedly drawn attention to the need for additional revenue.

Speaking with CP24, Tory said “no person in their right mind” would call a tax increase a highlight but he said that he is proud of doing so “with honesty, transparency and with a real plan to make use of the (new) tax money.”

“I think when people really get the most resentful about their taxes being raised is when they see it just going into a black hole and nothing sort of comes out of the black hole,” he said. “In this case it is specifically to finance a transit plan that has been very clearly spelled out and a housing plan. I think when people see the houses getting built; when they see the transit getting built they will say thank goodness we took that step.”

Homicides were down in 2019 but shootings were up

While the number of homicides in the city was down in 2019 after a record 96 the year before, shootings are up for the second year in a row with 464 individual occurrences through Saturday.

During the civic holiday weekend this past August a total of 17 people were shot in 14 separate incidents across the city, prompting the provincial and federal governments to come forward with millions in emergency funding that the Toronto police used to launch a new operational strategy known as Project Community Space.

In 2020, Tory said that he wants to be able to “develop a plan in advance” so the city is in a “better position to respond” to the rise in gun violence that is typically seen in the summertime.

He said that he also wants to see a continued crackdown on street gangs.

“The gang situation has now reached the point where sometimes they are just proving they can shoot somebody for the sake of doing so,” he said. “It was more easily understood when one gang member was shooting another. It didn’t make it any more acceptable but when they start taking innocent people out just for the sake of showing they can it takes it to another level that causes tremendous anxiety. It is a very perplexing and heartbreaking problem.”