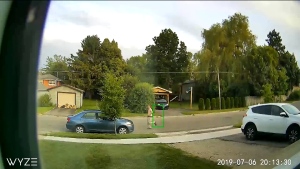 A 32-year-old man from Milton has been arrested in connection with the sexual assault of three young girls in the Kitchener-Waterloo area over a six-year period. (Police handout)

A 32-year-old man from Milton has been arrested in connection with the sexual assault of three young girls in the Kitchener-Waterloo area over a six-year period.

The incidents occurred between October 2013 and July 2019 and involve children ages six and under.

Police say in each of the three incidents, the suspect sexually assaulted the young girls in the stairwell of apartment buildings in the Kitchener-Waterloo area.

The suspect, who has been identified as Timi Gusak, has been connected to all three of the assaults through DNA analysis, police say.

The suspect resided in the Kitchener-Waterloo area during two of the alleged assaults that occurred in 2013 and 2017.

He was living in Milton at the time of the most recent incident on July 6, 2019.

“He does have personal connections to this region (Kitchener-Waterloo) that remain,” Waterloo Regional Police Insp. Mark Crowell told reporters during a news conference on Friday morning.

He would not elaborate on what ties he currently has to the community.

Police say they are working with the Halton Regional Police Service to see if there are any possible victims in that jurisdiction.

“We continue to be in contact with them regarding any investigative leads that may occur not only within our region (but) outside.”

According to investigators, the victims in all three incidents did not know the suspect prior to the assaults.

“We believe this was an unknown offender to all of the victims and witnesses that have come forward,” Crowell said.

Crowell noted that the police are now embarking on a “new phase of the investigation.”

“We now can hone in on this individual, track movements over the years, and explore any linkages, relationships or any aspects of the investigation that we have not yet uncovered,” he said.

“We continue to investigate further and we encourage anyone with additional information to come forward.”

A 32-year-old man from Milton has been arrested in connection with the sexual assault of three young girls in the Kitchener-Waterloo area over a six-year period. (Police handout)