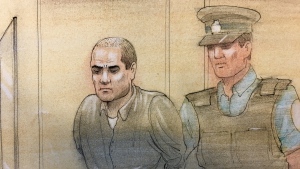 Lawyers say they are close to finalizing details that would allow a trial by Zoom for a man who killed 10 people when he drove a rental van down a busy Toronto sidewalk.

Alek Minassian faces 10 counts of first-degree murder and 16 counts of attempted murder in connection with the April 2018 incident.

He appeared by video during a virtual court hearing Thursday morning, where the prosecution and defence said they were sorting out the logistics of holding the trial by the videoconference software.

Justice Anne Molloy said she is holding another trial by Zoom at the moment that could be a blueprint for Minassian's trial, which is set to begin on Nov. 9.

A recent decision by the Superior Court of Ontario's chief justice limits the number of people in a physical courtroom to 10 due to the COVID-19 pandemic.

Minassian's trial by judge alone was set to begin on April 6, but was postponed because of the pandemic.

In early March, Minassian admitted in court to planning and carrying out the attack. The judge has said the case will turn on Minassian's state of mind at the time of the attack, not whether he did it.

Minassian will next appear in court on Oct. 28.