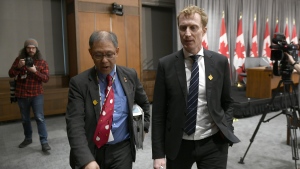 Miller says Canada needs a reckoning because there is a pattern of police violence against First Nations, Metis and Inuit people that continues to repeat itself.

Miller says he "watched in disgust" a graphic video of an RCMP officer in Nunavut ramming the door of his car into an Inuk man walking along the road in Kinngait Monday evening.

And Miller says he does not understand how police sent to check on the well-being of 26-year-old Chantel Moore in Edmundston, N.B., Thursday ended up shooting and killing her.

Miller says he has seen firsthand the physical reaction of fear Indigenous people have when they encounter police, a fear he has never felt himself as a white man and a fear nobody should have.

He says full investigations are needed and answers must come quickly on the specific events but that Canada as a country needs to take a hard look at why this is happening.