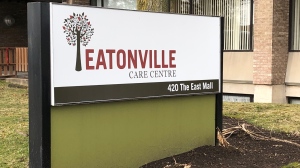 One of the city’s deadliest COVID-19 outbreaks is officially over.

Eatonville Care Centre in Etobicoke first declared a COVID-19 outbreak back in March and in the weeks and months that followed more than 130 residents were infected with the virus and at least 43 died.

In April, the home was one of six facilities where Canadian Forces troops were deployed but they left on June 16 after the outbreak was brought largely under control.

In a statement issued on Tuesday afternoon, Executive Director Evelyn MacDonald said that as of today Toronto Public Health has confirmed that all positive cases within the home are “officially resolved” and that the outbreak is “officially over.”

“Today’s positive news would not be possible without our staff who showed tremendous dedication and compassion over these past few months. I am so proud of our team,” she said. “To make sure COVID-19 does not re-enter our home, all infection prevention and control measures remain in place. Eatonville Care Centre staff will continue to wear appropriate personal protective equipment as directed by Public Health, conduct daily screening procedures and follow all enhanced cleaning protocols.”

The outbreak at Eatonville Care Centre was among the worst in the city in terms of fatalities, though more deaths were reported at Downsview Long Term Care Centre, Altamont Care Community and Isabel and Arthur Meighen Manor.

In her statement, MacDonald acknowledged that many families “are mourning a terrible loss” and said that the facility shares “in this sorrow and want families to know we will continue to support them as we enter this new phase.”

There have been a total of 371 COVID-19 outbreaks reported at Ontario long-term care homes since the start of the pandemic but only 46 are still considered active.