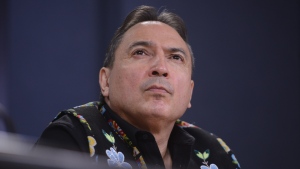 OTTAWA - First Nations and Metis leaders say they need more from Ottawa to combat COVID-19 in their communities, including money, assistance with security and help acquiring protective equipment.

Assembly of First Nations National Chief Perry Bellegarde says money earmarked for First Nations for COVID-19 response so far is not proportional to the populations in their communities and more financial help will be needed.

He is calling on Ottawa to immediately make available 10 per cent of the future funding that will be allocated to Indigenous COVID-19 response to help First Nations deal with the health and social impacts of the pandemic.

“Our child poverty rates are four times that of other children in Canada, overcrowding is seven times higher and the unemployment rate before the pandemic was two-and-a-half times the rest of Canada,” Bellegarde told MPs on House of Commons finance committee.

“Because of these statistics and a host of other stats that I always talk about, I can provide and show that supports are needed at a higher proportion of response because of those needs.”

First Nations must also be part of all decision-making when it comes to deciding how resources are allocated - something that is not happening now, Bellegarde said.

Metis National Council vice-president David Chartrand said he's been forced to order personal protective equipment like masks and hand sanitizer directly from China himself because Metis communities have not received any of these supplies due to a squabble over who is responsible for this aid to Metis - the provinces or the federal government.

“The don't have any face masks, no hand santizers, no disinfection, nothing coming into our communities right now,” Chartrand told the committee.

“Those are risk factors for me, purchasing in China and making sure these products get here in time. We have no other supports coming from any government, we're standing on our own as Metis people yet we pay billions in taxes in this country and we have to fend for ourselves because of this political football of who's responsible for us.”

They also have concerns about public safety in the midst of the pandemic. Picard said many First Nations in Quebec don't have their own policing services, and they are calling for access to private security agencies or the Canadian Rangers to support local security efforts.

National Chief Norman Yakeleya of the Dene Nation outlined concerns about elders and knowledge-keepers who may not be getting enough food due to their remote locations and actions taken by some stores that have raised their prices.

“We are finding out that some of the elders have to go a long distance to pick up groceries in other communities. We have four communities without any stores. They cannot live at this time on the existing pensions that they receive,” Yakeleya said.

The Indigenous leaders urged government to look at the unique needs of Indigenous business owners affected by the pandemic-induced economic downturn, including issues of eligibility for the wage subsidy and loan programs announced to date by the federal government.

For example, many Indigenous business owners won't be able to meet the $50,000 minimum payroll requirement for loans under the Canada Emergency Business Account.

Using federal government departments to administer emergency assistance through existing programs will also limit the availability of some of funds for First Nations businesses, Bellegarde said.

“Therefore, we're urging flexibility must be shown and must be demonstrated through various government departments,” he said.

Chartrand noted many small-business owners in his nation finance their operations through Metis capital corporations rather than traditional banks. These corporations are collectively prepared to deploy $17.3 million toward interest-free, bridge loans to Metis small business clients, but they need government backing first.

“This is money we have in the bank in these capital corporations, so we're not asking for new money at this point in time. We're saying ... just give us the backing from Canada and we'll deploy this money out right now to help small businesses,” Chartrand said.