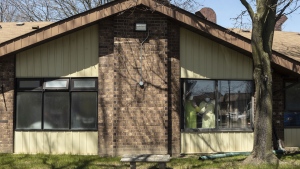 Staff members stand at a window as they watch a parade of well wishers as they drive through Orchard Villa Care home, in Pickering, Ont. on Saturday, April 25, 2020. Experts say the path to fixing long-term care in Canada after the pandemic is not clear, but all agree it starts with improving work conditions for carers. THE CANADIAN PRESS/Chris Young

TORONTO - For-profit long-term care homes in Ontario saw significantly worse outbreaks of COVID-19 and more related deaths than their non-profit or municipally run counterparts, according to a new study released on Wednesday.

The paper in the peer-reviewed Canadian Medical Association Journal raises questions about the ownership status of nursing homes, a factor the association that speaks for the facilities said last year had no impact on quality of care.

The research looked at all 623 long-term care homes in Ontario, from March 29 - the date of the first reported case of coronavirus in a home - until May 20. Collectively, the facilities housed more than 75,000 seniors - most of them with multiple health conditions, both physical and cognitive.

In all, more than 5,200 residents contracted COVID-19 during the study period. More than one quarter of those infected - 1,450 - died.

In Ontario, 57 per cent of nursing homes are set up to be profit-making - the highest rate in the country. Another 26 per cent are non-profit and 16 per cent are municipally run. While profit status had no impact on whether a facility had a coronavirus outbreak, the study finds, it did play a significant role in what happened if one occurred.

“We did find evidence that for-profit LTC homes have larger COVID-19 outbreaks and more deaths of residents from COVID-19 than non-profit and municipal homes,” the study finds. “Those with older design standards appear to show worse outcomes.”

An accompanying commentary notes upgrading facilities - many beds are at or below 1972 standards - likely won't fix the situation at for-profits if further research confirms chain ownership is a key factor on its own.

Dr. Samir Sinha, a Toronto-based geriatrician not involved in the study, said 30,000 long-term care beds in Ontario are in dire need of upgrades.

“Many of these older multi-bedded homes happen to be owned by for-profits,” Sinha said. “The study really speaks to the need to redevelop that.”

The government of Premier Doug Ford initially promised to build 15,000 beds in five years and redevelop another 15,000, Sinha said. However, only a relative handful have been built or redeveloped, and the government has now significantly tempered its ambitions.

Last week, the government announced it is changing the way it funds long-term care home expansions in a bid to spur construction, while conceding it would now pay for 8,000 new beds, and 12,000 renovated beds in the same five-year period.

In the interim, it has also limited room occupancy to two, further exacerbating bed shortages.

The Ontario Long Term Care association, which speaks for nursing homes and has complained about underfunding, did not respond to a request for comment on the study.

Separately Wednesday, the Ontario Health Coalition said 95 per cent of staff in the province's nursing homes reported basic care needs of residents - such as bathing, oral care and emotional support - were going unmet due to staff shortages.

Others said they didn't have enough time to properly feed residents, get them to the washroom on time, or make sure they didn't develop pressure ulcers - a situation especially problematic at night and on weekends. Most respondents reported the situation had worsened since the pandemic hit in March.

In response, Ford said the survey findings show why his government passed ongoing emergency powers to be able to “flow staff from the hospitals into long-term care.”

“If requirements to fund adequate levels of staffing affect the bottom lines of for-profit facilities, then it might be time for this care to be turned over to public and non-profit entities,” the journal commentary says.

This report by The Canadian Press was first published on July 22, 2020.