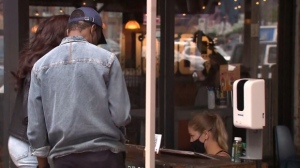 More than 600,000 vaccine receipts were downloaded from the Ontario government’s website on Wednesday as a new mandate barring unvaccinated individuals from accessing a number of non-essential businesses and settings formally took effect.

Health Minister Christine Elliott says that a total of 637,000 of the PDF receipts were downloaded throughout the day on Wednesday, brining the total that have been downloaded so far to 2.7 million.

All Ontarians 12 and up will be required to produce a copy of the receipt along with photo identification to gain access to a number of settings over the coming weeks, including gyms, movie theatres and restaurants for the purpose of indoor dining.

The Ford government, however, has said that it hopes to be able to make new scannable QR codes available to Ontarians to prove their vaccine status as of Oct. 22.

The push comes amid concerns that the existing PDF receipts can be easily edited to change the name of the individual who received the vaccine.

"It takes only five to 10 minutes for a person to download the document and then make the editing in the document," Shabnam Preet Kaur, a forensic document examiner, told CP24 Thursday night.

"Now that people are really tech-savvy, people know how to manipulate a document, and PDF is one of the very easiest documents that can be manipulated."

She said it is not easy to identify whether someone is showing an original vaccine document or a fabricated version.

Kaur added that introducing a QR code application will be better as it is harder to manipulate.

"We know that PDF documents can be easily updated using the tools that are built into all of the operating systems on all of the devices that all of us use," he told CP24 Thursday night.

Levy believes it would have been better for the province to wait for the launch of its vaccine passport app.

"First of all, if they prepared in advance, we would have the app by now. But even if they hadn't, if we had simply waited a month, we wouldn't be for the next four weeks having to deal with this relatively insecure, frankly, not very convenient solution," Levy said.

"The problem here is that the health ministry is taking it on faith that Ontario citizens will do right by them. They've actually said in public, we're hoping that Ontario citizens will do the right thing. Well, in the world of security, it doesn't work that way. You've got to build a robust system to protect against what we'd like to call malevolent actors, people who would do harm."

When asked about the reliability of the receipts, a spokesperson for the Ministry of Health told CP24 Thursday that they "are confident the overwhelming majority of Ontarians will do the right thing."

"Over 79 per cent of Ontarians over 12 have already received two doses and will have a secure certificate for use in required settings."

Premier Doug Ford has insisted that Ontario’s new vaccine certificate system will be a strictly “temporary measure” that will be lifted as soon as the threat posed by the COVID-19 pandemic subsides.

In the meantime many public health officials are welcoming the launch of the vaccine requirement as a difficult but necessary measure amid the Delta-driven fourth wave of the pandemic.

“I am relieved at the launch of the provincial government’s vaccination certification program yesterday to protect individuals and high-risk settings in our community,” Peel Region’s Medical Officer of Health Dr. Lawrence Loh told reporters during a briefing earlier on Thursday. “This temporary measure will help to reduce contacts and risks for our residents. It will do so by protecting those who haven't had the opportunity to receive two doses of vaccine in places where precautions can’t consistently be followed. Please continue to be kind and understanding as everyone works to implement this program and keep our community safe.”

Ontario administered more than 44,000 doses of COVID-19 vaccine during the first day that the vaccine certificate program was in effect on Wednesday, it’s highest number in any single 24 period since Sept. 4.

More than a third of those doses (15,015) were administered to people between the ages of 18 to 29. Chief Medical Officer of Health Dr. Kieran Moore has previously said that he is optimistic that the vaccine certificate program will help to boost vaccination rates among that group, which remains the least protected demographic.