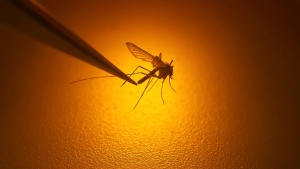 Health officials in Peel Region are reminding residents to protect themselves from insect bites after mosquitoes carrying the West Nile virus were found in the area.

In a news release issued Wednesday, Peel Region said the mosquitoes were collected from five traps in Mississauga and Brampton.

A total of 33 mosquito traps were set up in Mississauga, Brampton, and Caledon in early July to monitor the virus’ activity.

“West Nile virus is a mosquito-borne disease that is passed to humans via the bite of an infected mosquito,” Lawrence Loh, Peel’s medical officer of health, said in a statement.

“Although the likelihood of getting a West Nile virus infection is low, there are simple precautions that residents can take to protect themselves and their family against mosquito bites when outdoors.”

According to the Public Health Agency of Canada, symptoms of West Nile include fever, muscle weakness, confusion, rashes, headaches and a sudden sensitivity to light. In very rare cases, it can cause serious neurological illnesses.

Symptoms generally show between two and 15 days after infection.

Ways to prevent bites and reduce the chance of contracting the virus include applying Health Canada-approved insect repellent, avoiding shaded or wooded areas, taking extra precautions during dusk and dawn when mosquitoes are most active, and ensuring all windows and door screens fit securely and are free of tears and holes.

Health officials are also urging residents to drain items in their property that hold stagnant water, which is an ideal breeding site for mosquitoes.